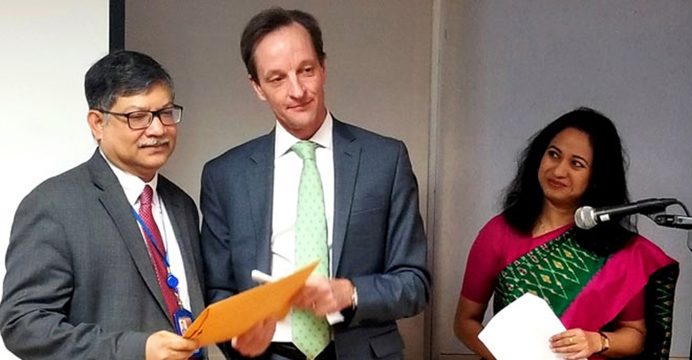 Committee for Development Policy (CDP) of the United Nations has officially declared the eligibility of Bangladesh for graduating from the Least Development Countries (LDCs).

“The CPD on Friday handed over a formal letter in this regard to Bangladesh’s Permanent Representative to the UN Masud Bin Momen at a programme organized at the permanent mission of Bangladesh in New York,” said an official release received here today.

Chair of the CDP Jose Antonio Ocampo attended the historical event along with some other senior UN and Bangladesh High Commission officials.

A video featuring the progress that Bangladesh made under the leadership of Father of the Nation Bangabandhu Sheikh Mujibur Rahman and her daughter Prime Minister Sheikh Hasina was screened at the beginning of the programme.

“The day is a historic day for all of us as Bangladesh for the first time attained all the three criteria for graduating from LDCs,” Masud Bin Momen told the programme after receiving the letter from the CPD.

Earlier on Thursday, the CPD at a programme at the UN headquarters in New York announced that Bangladesh along with Lao People’s Democratic Republic and Myanmar met the graduation criteria for the first time.

For the HAI, a country must scores 66 or above and for EVI 32 or below. Bangladesh scored 72.9 and 24.8 in the two indices respectively.

Bangladesh, however, will have to maintain the thresholds for the three indices till the country’s final graduation from the LDC category, which the UN will declare in 2024.

The CDP will review the country’s status in 2021 and 2024 for completing the process of the graduation, which has begun with the announcement of country’s eligibility for getting out to the middle-income group from the LDC category.

Meanwhile, the nation is taking all out preparations for a gala celebration next week as Prime Minister Sheikh Hasina will officially announce the beginning of the process of the country’s prestigious graduation from the LDCs.

Celebrating the significant achievement of the nation and government, Sheikh Hasina will be accorded a reception on March 22 at the Bangabandhu International Conference Centre (BICC).

Apart from the reception, a jubilant procession will be brought out in the capital on the same day. Similar rallies will also be organised across the country from March 22-28 when ministries will display the government’s achievements in different sectors.

The home ministry has already formed a committee to celebrate the achievement at all districts with maintaining security and safety.

Last year in October, the United Nations Conference on Trade and Development (UNCTAD) in a report projected that Bangladesh would qualify primarily to graduate from the LDCs list in March.