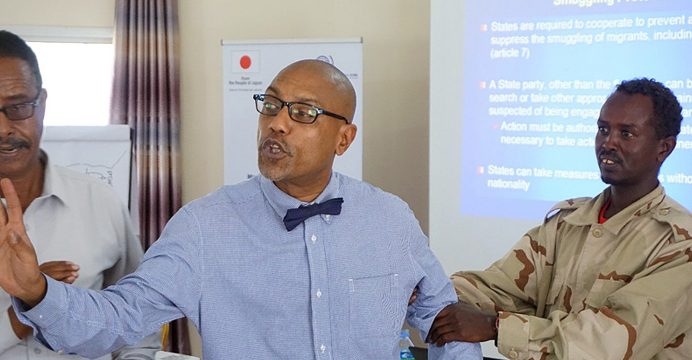 Facilitated by IOM’s Africa Capacity Building Centre’s (ACBC), the training in Berbera, Somaliland included real-life examples and theory relating to the international code for the security of ships and port facilities, international legal obligations, rescue at sea and migrant smuggling by sea.

According to an IOM-commissioned Trafficking in Persons Assessment in South and Central Somalia (Oct 2016), sea transportation is the most utilized form of transport by traffickers to facilitate the irregular movement of victims.

Somaliland is yet to attain international recognition as an independent state which creates a particularly weak spot in terms of international legal frameworks to safeguard Somaliland’s territorial waters. The civil war in Yemen also exposes Somaliland’s shipping line to potential criminal activity hence a much-required balance between security and assistance.

The training’s real-life scenarios benefited from the Ramkishun’s experience as a captain, border coast guard patrol unit in South Africa, complemented by his expertise on organized crime.

Commenting at the end of the training, one participant said, “This is the first time we have had a training like this where real cases and real examples are discussed. I knew very little about the extent of organized crime and how it can negatively impact Somaliland. It’s the first time I feel I have a chance to become a better officer. I do look forward to a possible simulation in future where we can practically learn some of these things.”

This activity falls under a multi-sectoral response project, funded by the Government of Japan, to contribute to increasing human security and stability in Somalia particularly among vulnerable migrants and mobile populations.