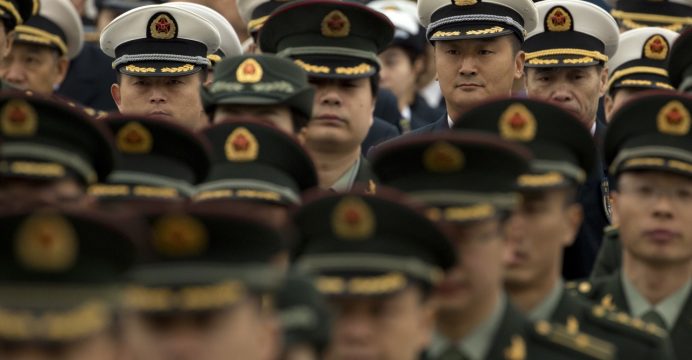 China defends hike in military spending as proportionate and low

China’s increase in military spending for 2018, the biggest rise in three years, was proportionate and low, and Beijing had not been goaded into an arms race with the United States, state media said on Tuesday.

China on Monday unveiled an 8.1 percent rise in defense spending at the opening of parliament, fuelling an ambitious military modernization program and making its neighbors, particularly Japan and self-ruled Taiwan, nervous.

In an editorial, the official China Daily said the figure had prompted “finger-pointing from the usual suspects”.

“China’s defense budget is neither the largest in size – it accounts for just one-fourth of the military spending of the United States – nor does it have the fastest growth rate,” the English-language newspaper said.

“And if calculated in per capita terms, China’s military lags well behind other major countries.”

“There are a lot of questions on the minds of countries in the region and extending beyond the region of what exactly does this mean. People shouldn’t be left guessing as to exactly what the objective of these increases is,” he said at a press roundtable in Tokyo where he is meeting Japanese officials.

China insists its military spending is transparent and that it poses a threat to nobody, simply needing to update old equipment and defend its legitimate interests, even as it is increasingly assertive over disputes in the East and South China Seas and on self-ruled Taiwan, which China claims.

In the East and South China Seas, China is simply trying to stand up for itself, the China Daily said.

“The country has seen its maritime interests being increasingly infringed upon in recent years, and thus seeking a stronger military is natural for it to safeguard its interests and counter any threat that may materialize from the aggressive posturing of others upset by its rise.”

U.S. President Donald Trump has proposed the largest military budget since 2011, focused on beefing up the United States’ nuclear defenses and countering the growing strength of China and Russia.

Official Chinese defense spending is about one-quarter that of the United States, though many foreign analysts and diplomats say China under-reports the figure.

Widely-read Chinese tabloid the Global Times said if China really wanted to expand militarily, the defense budget should really be rising 20 to 30 percent.

“China has obviously not fallen into the mind-set of engaging in an arms race with the U.S. Otherwise it could totally realize double-digit increases in its defense expenditure,” the paper said in its editorial.

U.S. provocations in the South China Sea, tension in the Taiwan Strait and the United States, Japan, Australia and India forming alliances demand a rise in spending, it added.

“But Beijing has stuck to its own template and was not disturbed by external factors.”

Still, China has made no secret of its broader military ambitions, with President Xi Jinping promising last year to make China’s armed forces world-class by the middle of the century.