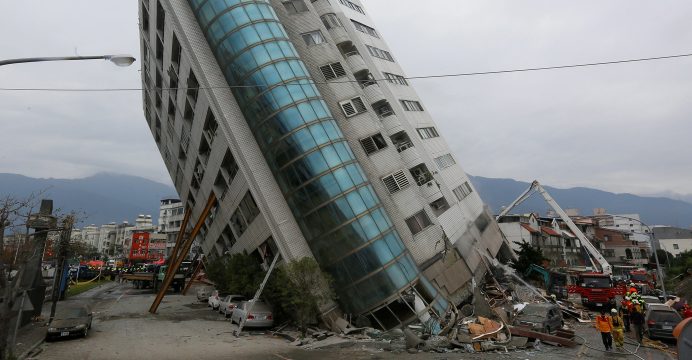 Braving the danger of aftershocks, rescuers found the bodies in the ruins of a 12-story building after searching for more than 100 hours since the 6.5- magnitude earthquake jolted Hualien late Tuesday night.

The last found two persons are from the same family with the three found on Saturday. The family from Beijing was travelling in Taiwan, and stayed in an inn on the second floor of the Yun Men Tusi Ti building on Tuesday.

Rescuers said the search was extremely difficult because the 12-story building has tilted after the earthquake, with the first four floors severely squeezed and distorted.

“The first four flours have become something like a multi-layer sandwich, and have caved into the ground. The roofs, floors and walls are squeezed together. And there is very limited space for us to operate inside,” said one rescuer surnamed Huang.

“Besides, we must be very careful to avoid causing further collapse of the building by using large machines. So it usually takes two or three hours to drill through one wall,” Huang said.

They managed to reach the room where the family was trapped by punching through the fourth and third floors on Saturday, and uncovered three of the five.

But the rescuers on Sunday found the remaining two were pressed by the roof beams, and they decided to dismantle the building from the top to retrieve the bodies.

The 17 victims of the earthquake include nine from Chinese mainland, five from Taiwan, one from the Philippines and two from Canada. A total of 285 people were also injured.