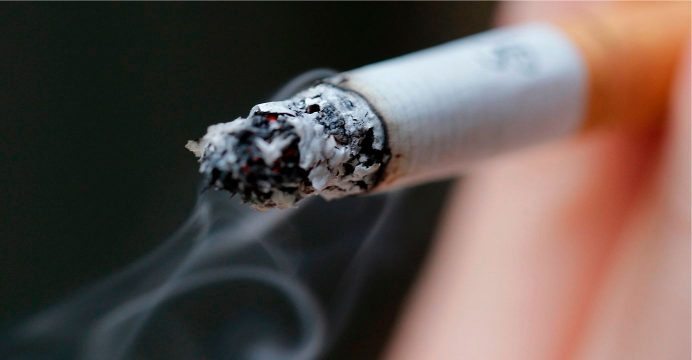 Researchers examined data on 2,991 black adults who didn’t have diabetes, including 361 who were current smokers and 502 who were ex-smokers.

For black people, smoking at least a pack of cigarettes a day is tied to a higher risk of developing diabetes, a U.S. study suggests.

While previous research has found that smokers and black people both have higher risks of diabetes than nonsmokers and individuals from other racial and ethnic backgrounds, the current study offers fresh evidence that the amount of cigarette use can impact this risk, reports Reuters.

Researchers examined data on 2,991 black adults who didn’t have diabetes, including 361 who were current smokers and 502 who were ex-smokers.

After an average follow-up of eight years, 479 participants developed diabetes. Compared to people who never smoked, participants who smoked at least 20 cigarettes a day, roughly the size of one pack of cigarettes, were 79 percent more likely to develop diabetes.

Ex-smokers and people who smoked no more than 10 cigarettes a day, however, didn’t appear to have a higher diabetes risk than people who never used cigarettes at all.

“Obviously, all smokers should be encouraged to quit,” said senior study author Dr. Michael Hall of the University of Mississippi Medical Center in Jackson.

“However, it is possible that decreasing the number of cigarettes smoked daily may reduce the risk of developing diabetes in blacks at risk,” Hall said by email.

Overall, 15 percent of the people who never smoked developed diabetes, the study found. That compares to 20 percent of former smokers and 17 percent of current smokers.

After researchers accounted for other factors that can influence diabetes risk, smoking status alone didn’t appear to influence whether people developed diabetes.

But then researchers took a closer look at how much people smoked and found heavy smoking and more years as a smoker were associated with an increased risk of diabetes.

It’s possible that smoking might cause diabetes because it can damage the pancreas, a critical organ involved in helping the body regulate levels of sugar in the blood, Hall said. Smoking might also contribute to diabetes by causing inflammation, he said.

“People who smoke also have a tendency towards other unhealthy lifestyle habits including drinking more alcohol, worse diet, and less physical activity,”

Hall added. “Our study adjusted for as many of these variables as possible and the results suggest factors beyond those related to lifestyle may play a role in this association.”

The study wasn’t a controlled experiment designed to prove whether or how smoking might directly cause diabetes.

Another limitation is that it included only a small number of diabetes cases, particularly among current smokers, the authors note in the Journal of the American Heart Association. It’s also possible that results from a study of only black participants might not reflect what would happen to people from other racial or ethnic backgrounds.

“Smokers who have diabetes are more likely to have serious health problems, including heart and kidney disease, poor blood flow in the legs and feet that can lead to foot infections, ulcers and possible amputation of toes or feet; retinopathy, an eye disease that causes blindness; and peripheral neuropathy, damaged nerves to the arms and legs that causes numbness, pain, weakness and poor coordination,” Folan, who wasn’t involved in the study, said by email.

Smoking can also make it hard for people to lose weight or avoid weight gain, and obesity is also a risk factor for developing diabetes and having complications from this disease.