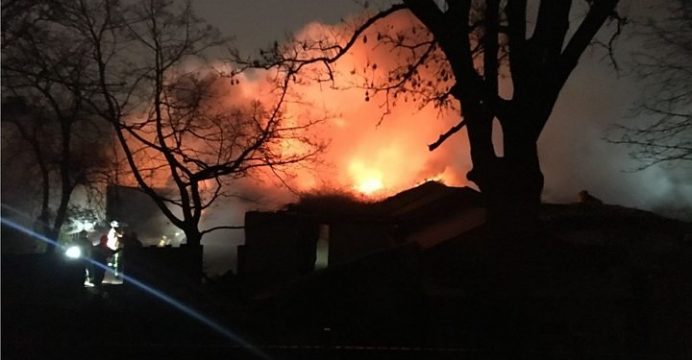 London Zoo shuts after a fire killed an aardvark

One person was taken to hospital and eight were treated at the scene for injuries. The zoo said an aardvark, called Misha, had died in the fire and that four meerkats were unaccounted for

London Zoo is shut “until further notice” after a fire which injured staff and killed an aardvark. At its height, more than 70 firefighters tackled the fire which started in the Animal Adventure section and spread to the adjacent shop.

One person was taken to hospital and eight were treated at the scene for injuries. The zoo said an aardvark, called Misha, had died in the fire and that four meerkats were unaccounted for, reports BBC.

Misha, a 9-year-old aardvark, died in the London Zoo fire

The cause of the fire, which is now under control, is not yet known. Ten fire engines were called to the zoo, which sits in the capital’s Regent’s Park, shortly after 06:00 GMT.

Six people were given help at the scene for smoke inhalation and two for minor injuries, London Ambulance Service said. One person was taken to a north-west London hospital, the service added.

Duty staff who live on site were on the scene “immediately” and started moving animals to safety, the zoo said.

In a statement, the zoo said it was “devastated” to hear of the death of one of its animals.

It said: “Sadly our vets have confirmed the death of our nine-year-old aardvark, Misha. There are also four meerkats unaccounted for at this stage, and we have limited access to the site to confirm this.

“All other animals in the vicinity are being monitored closely by our vets, but early signs suggest they have not been affected. We will continue to monitor them over the coming days.”

Adnan Abdul Husein said he saw the blaze from a nearby park when he was out walking his dog, and alerted zoo security.

“It didn’t look like, you know, smoke just coming out of a chimney, it was quite heavy”, he said.

“As I got closer to the zoo I could see that it was actually inside the zoo so I went over to the security and told them – there’s flames or there’s smoke coming from inside there, do you know anything about it? And they obviously didn’t have a clue.”

London Fire Brigade (LFB) station manager Clive Robinson, who was at the scene, said three-quarters of the cafe and shop had been affected by the fire and half of the roof.

He said: “Firefighters worked hard to bring the fire under control as quickly as possible and to stop it from spreading to neighboring animal enclosures.”