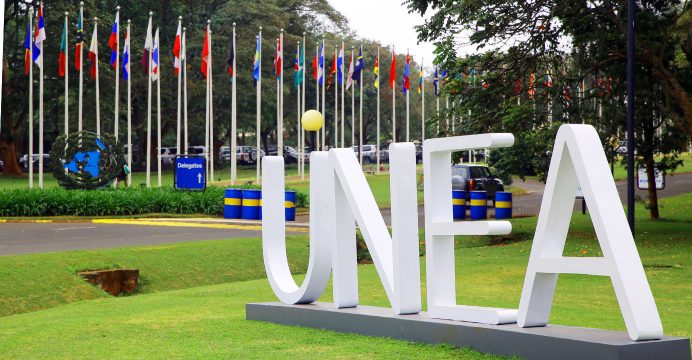 The third session of the United Nations Environmental Assembly (UNEA) ended in Nairobi on Wednesday with leaders pledging to end pollution for a clean environment.

Over 4,000 heads of state, ministers, business leaders, UN officials, civil society representatives, activists and celebrities who attended the three-day meeting also agreed on a raft of resolutions and pledges promising to improve the lives of billions across the globe by cleaning up air, land and water.

“Any threat to our environment, health, economy, security, well being and survival has to be stopped forthwith,” UNEA outgoing President Edgar Gutierrez-Espeleta said in a closing statement.

“With the promises made here, we are sending a powerful message that we will listen to the science, change the way we consume and produce, and tackle pollution in all its forms across the globe,” said Edgar Gutierrez-Espeleta who is also the Minister of Environment and Energy of Costa Rica.

They expressed commitment to collaborating with the politicians, scientists, the private sector and civil society to deliver a pollution free planet.

The assembly also pledged to continue to respect the Rio principles on environmental and development in efforts to make the environment clean.

According to the World Health Organization (WHO) guidelines for air quality, more than 17,000 people die prematurely due to ill health associated with pollution.

Hundreds of children below the age of five die from contaminated water and poor hygiene while women and girls continue to be affected from smoke emanating from fuel wood.

The ministers noted that it is unfortunate that every year 4.8 to 12.7 million tons of plastic are dumped in oceans while 40 million tons of electronic waste are generated annually and increase every year by 4 to 5 percent, causing severe damage to ecosystems, livelihoods and health. Erik Solheim, head of UN Environment Programme (UNEP), said the assembly on Wednesday put the fight against pollution high on the global political agenda.

“We have a long struggle ahead of us, but the summit showed there is a real appetite for significant positive change. It isn’t just about the UN and governments, though,” Solheim said.

He said the huge support from civil society, businesses and individuals — with millions of pledges to end pollution — “show that this is a global challenge with a global desire to win this battle together.”

The environment ministers for the first time issued a declaration, calling for the world to honor efforts to prevent, mitigate and manage the pollution of air, land and soil, freshwater, and oceans — which harms health, societies, ecosystems, economies, and security. The ministers also called on member states to take actions against chemicals that are used in daily lives since they affect communities who do not know the sides they are exposing themselves into.

They appreciated the role played by individual countries in offering technological solutions and asked other countries to emulate them and deliver the goals as agreed.

The assembly also called for action against armed conflicts, and terrorism that damages the environment and undermining the achievements of sustainable development and threatening the health of the people and ecosystem.