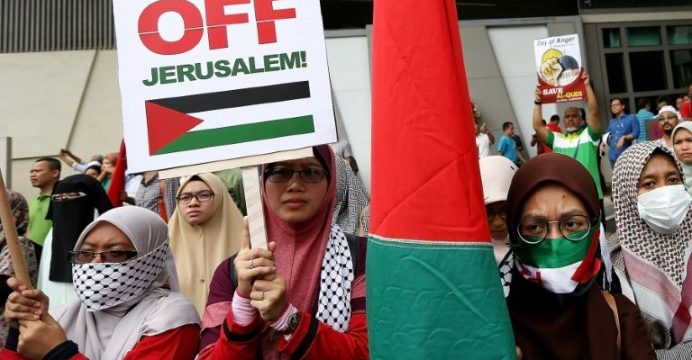 The status of Jerusalem is deeply sensitive for Muslims, and protesters have started taking to the streets in cities across the world following the policy shift.

Thousands of protesters in Muslim- majority Malaysia demonstrated on Friday outside the US embassy over President Donald Trump’s recognition of Jerusalem as Israel’s capital, denouncing it as a “slap in the face” for Muslims worldwide.

Some 5,000 demonstrators marched on the Kuala Lumpur mission after the main weekly Muslim prayers in a nearby mosque, chanting and waving banners that read “Hands off Jerusalem” and “Down USA President Trump”.

Trump’s announcement has been met by an almost universal diplomatic backlash, sparked Palestinian protests, sporadic clashes with Israeli security forces and a call for a new intifada from Hamas’s leader, reports BSS.

The status of Jerusalem is deeply sensitive for Muslims, and protesters have started taking to the streets in cities across the world following the policy shift.

The protesters in Kuala Lumpur were led by Khairy Jamaluddin, the sports minister and head of ruling party UMNO’s youth wing, who accused Trump of having made “an illegal announcement”.

“What you did is against international law — Muslims cannot accept your action,” he said in a speech to the crowd during the hour-long protest.

Mohamad Rasul, a 51-year-old train driver taking part in the demonstration, described Trump’s move as “a slap in the face for Muslims. “This insensitive action will inflame the hearts of Muslims worldwide.”

In neighboring Indonesia, the world’s most populous Muslim-majority country, several hundred people demonstrated outside the US embassy in the capital Jakarta, carrying placards that said “No to Trump” and unfurling a large Palestinian flag.

Both Indonesia and Malaysia are staunch supporters of the Palestinian cause and solidarity protests are not uncommon.

Trump’s recognition of Jerusalem as Israel’s capital puts him at odds with the international community, which insists the issue can only be resolved in negotiations.