UAE’s Nisha Ali finished as the tournament’s leading run-scorer and wicket-taker with 90 runs and 12 wickets.
Thailand have been crowned champions of the ICC Women’s World T20 Asia Qualifier held in Bangkok as they beat newcomers at this level UAE by 22 runs after defending a total of 78. Thailand confirmed their superiority in the region at this level by winning their third Asian World T20 qualifying competition but there was no doubt that player of the match and player of the tournament was UAE’s Nisha Ali who today took four wickets in four balls and finished as the competition’s leading run-scorer and wicket-taker with 90 runs and 12 wickets.

Thailand won the toss in the final at TCG as they may have preferred to bat first after losing six wickets in chasing a target of 35 against Hong Kong on the day before. The most fluent player in the Thai batting line-up Nattakan Chantam soon came up against Nisha Ali who had already won three player of the match awards and bowled the second over and she struck an early blow as Nattakan was caught behind for just 2. 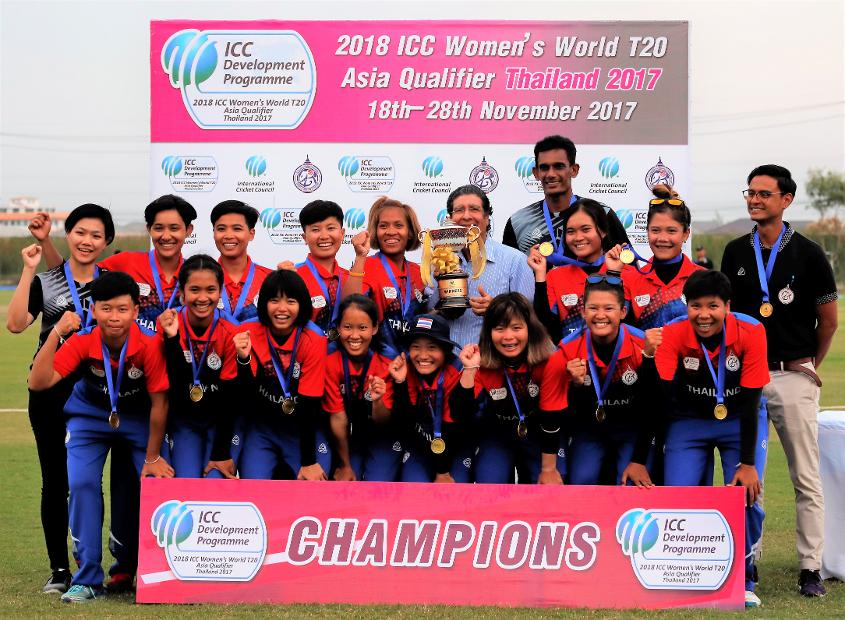 UAE could hit only two boundaries in their 20 overs as they were restricted to 56 for 9 and Nattaya Boochatham did her best to emulate Nisha Ali by taking 10 wickets for 27 in the tournament and playing a crucial innings in the final. The old adage is to look to put runs on the board in a final and Nattaya had played a vital role in doing just that and then ensuring Thailand defended their target to win by 22 runs. Both teams will be looking to make a considerable impact in the ICC Women’s World T20 Qualifier in Netherlands in June with the ultimate aim of winning a place in the ICC Women’s World T20 which will be staged in West Indies in November 2018.

The play-off for third place was contested between Nepal who had finished third in the table and Hong Kong who finished fourth and it was Nepal who took the honours as they claimed a comfortable victory by 36 runs. Nepal gained some consolation for missing out on reaching the after suffering defeat to UAE by only five runs.