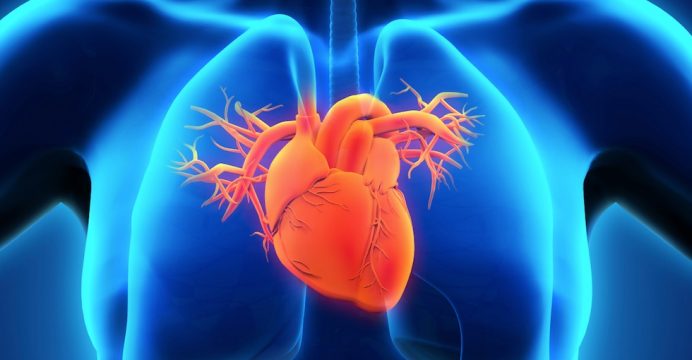 New cases of heart failure increasing in the UK, with numbers now similar to the four most common cancers combined

Heart failure means the heart is less able to pump blood around the body. This occurs after the heart becomes damaged, typically as a result of a heart attack, high blood pressure or cardiomyopathy.

Similarly, prevalence rates have remained stable over this period, but the number of existing chronic heart failure cases has increased substantially (by 23% – from 750127 to 920616 cases), which is likely to be a result of people living longer after heart failure.

Heart failure means the heart is less able to pump blood around the body. This occurs after the heart becomes damaged, typically as a result of a heart attack, high blood pressure or cardiomyopathy.

The results illustrate the successes of prevention measures, such as public health measures to reduce common cardiovascular risk factors (such as smoking cessation or improved diet), and improvements in clinical care (such as better management of heart attacks, hypertension or diabetes), but also demonstrate the vast impending burden for healthcare resources in the UK.

“Our findings have important implications for healthcare resource planning and prevention strategies, as the number of people affected by heart failure grows and places an ever-greater burden on health services,” says Professor Kazem Rahimi, The George Institute for Global Health, the University of Oxford, UK.

“To counter this, we need stronger public health action in disease prevention, improved resource planning, and efficient and effective care for newly-diagnosed patients and those surviving heart failure.”

The study is the largest investigation of heart failure incidence to link data from primary and secondary care to capture the full burden of heart disease and distinguish between new and existing cases of heart failure. It reviews the medical records of more than 3.9 million patients between January 2002 and December 2014, including people newly diagnosed and people living with heart failure during that period.

The researchers looked at patients’ medical and social factors, such as blood pressure, BMI, whether they smoked, and any other chronic conditions they had, as well as socioeconomic status, ethnicity and where they lived.

The results highlight important changes in the types of people facing heart failure over time. For example, the average age of people facing heart failure has increased from 76.5 to 77 years old, and the rate of new cases in the very elderly (people aged over 85 years) increased (by 8%, from 3926 cases per 100000 people in 2002 to 4244 per 100000 in 2014). Comparatively, the proportion of new cases decreased across most other age groups – except in people aged under 55 years, where the rates were too low to be able to compare how they changed over time. The authors explain that this could be a result of it being more difficult to manage symptoms in very elderly people.

There was also a substantial increase in the number of other chronic conditions patients had, indicating that treatment of heart failure is becoming more complex, further increasing the burden on health services.

Overall, the number of other chronic conditions increased from an average of 3.4 conditions in 2002, to 5.4 in 2014, with an increasing number of people having three or more other conditions (68% of patients in 2002, compared with 87% in 2014). The authors note that this increase in other conditions may be due to several factors, such as population aging, more disease screening programmes, greater awareness from doctors, and changes in types of the risk factor.

In addition, the proportion of patients presenting with three or more other chronic conditions ranged from 81% for the most deprived, to 77% for the least deprived group.

The authors calculate that if these inequities could be removed, there would be 31810 fewer heart failure cases annually in the UK.

“The disparities we have identified in the UK point to a potentially preventable nature of heart failure that still needs to be tackled, and to potential opportunities for more targeted and equitable prevention strategies,” says Professor Rahimi.

“Achieving equal access and use of healthcare is an important goal, and in this instance could help to tackle the biological, environmental and behavioral risk factors that put people from the more deprived background at greater risk of heart failure.”

With many other populations aging, the authors say that their findings could be applicable to many other developed countries.

They also note some limitations, including that some of the findings coincide with the introduction of a national care monitoring programme (the Quality and Outcomes Framework which was introduced between 2004-2006, while this study ran from 2002-2014) and this may explain some of the variation observed in these years.

The data used did not specify the type of heart failure patients faced, and the study relied on the accuracy of people’s medical records.