Left-arm paceman Usman Shinwari destroyed Sri Lanka with a five-wicket burst to help Pakistan achieve a convincing nine-wicket win in the fifth and final match for a 5-0 clean sweep of the series on Monday.

The win is Pakistan’s ninth in a row since winning the Champions trophy in June this year while Sri Lanka plummetted to their 12th defeat in a row, also losing 5-0 each to South Africa and India this year. 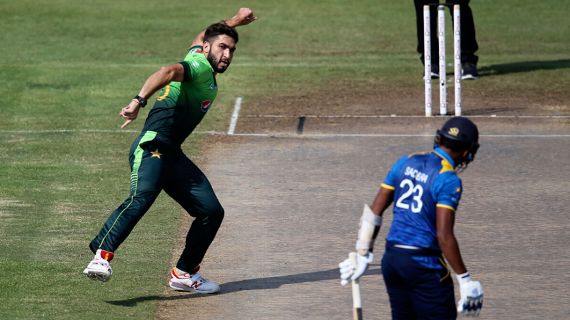 Zaman hit seven boundaries in his 47-ball knock before he fell with just 20 needed. Imam hit the winning boundary, finishing his 64-ball knock with four boundaries and a six.

But it was Pakistan’s new find Shinwari who rocked the Sri Lankans.

The 23-year-old finished with 5-34 as Sri Lanka, who won the toss and batted on an easy paced Sharjah stadium pitch, never recovered from early jolts of losing four wickets in the first three overs.

Only Thisara Perera (25), Lahiru Thirimanne (19), Seekuge Prasanna (16) and Dushmantha Chameera (11) reached double figures in an abysmal batting performance by Sri Lanka, their second lowest total in an ODI against Pakistan.

Their lowest total of 78 against Pakistan had also come at Sharjah in 2002.

Shinwari, who debuted in the fourth one-day of this series, bowled Sadeera Samarawickrama with the fifth ball of the match for nought and then had Dinesh Chandimal next ball, caught behind without scoring.

In his next over Shinwari had skipper Upul Tharanga bowled off a nippy delivery for eight and then trapped Niroshan Dickwella leg before with the fifth to leave Sri Lanka tottering at 8-4.

Shinwari completed his maiden five-wicket haul when he had Milinda Siriwardana (six) caught by Fakhar Zaman, his wickets coming off just 21 balls — third fastest to five wickets in an ODI.

Perera hit three boundaries and a six before he became one of two wickets by leg-spinner Shadab Khan in one over. Hasan Ali also took 2-19, 14 wickets in the series.

The two teams now play a three-match Twenty20 international series, the first two in Abu Dhabi on October 26 and 27 while the last in Lahore on October 29.