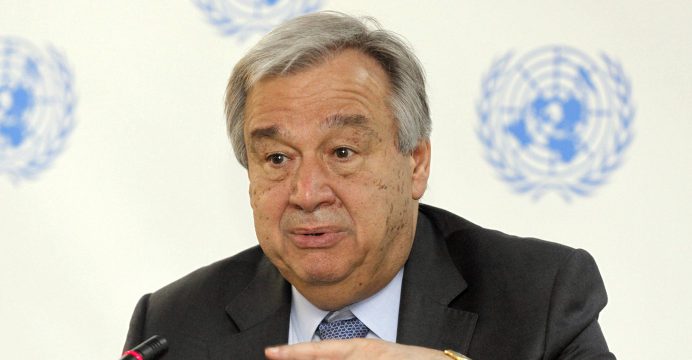 UN Secretary-General Antonio Guterres will meet with President Donald Trump at the White House on Friday to discuss UN reform and other “issues of mutual concern”, the UN spokesman said.

Guterres this week spoke out in defense of the Iran nuclear deal that Trump has refused to certify, describing the 2015 agreement as “essential” and “something that needs to be preserved.”

The fate of the deal is now in the hands of the US Congress.

It will be the UN chief’s first full formal meeting with Trump at the White House after a brief encounter with the US president in April.

During that visit to the White House, Guterres met with US national security adviser H.R. McMaster and dropped by the Oval Office, but there was no joint appearance with Trump.

Guterres held a bilateral meeting with Trump during the UN General Assembly session in New York last month during which the US president also led a high-level meeting on UN reform.

UN spokesman Stephane Dujarric said UN reform would be discussed along with “issues of mutual concern”, but did not provide details.

UN sources said they expected the Middle East peace process, North Korea, the Iran nuclear deal to be among the issues raised.

Guterres is also concerned by US threats to cut funding to the world body.