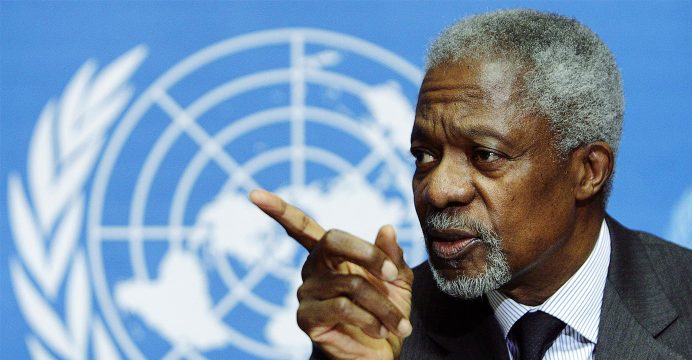 The Security Council will on Friday hold an informal meeting on Myanmar to hear former UN chief Kofi Annan provide details of a report on the plight of Rohingya Muslims, diplomats said.

The UN’s top political affairs official, Jeffrey Feltman, will travel to Myanmar on Friday for four days of talks on the crisis.

More than 500,000 people, mostly Rohingyas, have since late August fled an army campaign in Myanmar’s Rakhine state that the United Nations has denounced as ethnic cleansing.

UN Secretary General Antonio Guterres has called for an end to the military campaign, access for aid groups to reach the burned-out villages in Rakhine state and measures to allow the safe return of the Rohyinga.

“Mr. Feltman will be holding consultations with Myanmar to address these urgent issues,” said a UN official.

In late August, Annan presented the final report of an advisory commission on Rakhine state that he chaired at the request of Myanmar’s de facto leader Aung San Suu Kyi.

The report called for urgent action by Myanmar’s authorities to address the plight of the Rohingya, who are stateless and have long faced discrimination in the Buddhist-majority nation.

France and Britain requested the meeting with Annan as the council weighs its next steps to confront the crisis over the mass exodus of the Rohingya, who have crossed into Bangladesh.

A report by the UN human rights office in Geneva said Wednesday that the military operations were aimed at permanently expelling the Muslim minority from Rakhine state.

Britain has been working on a draft Security Council resolution that would call for the return of the Rohingyas, but negotiations with China, a supporter of Myanmar’s former ruling junta, have been slow, diplomats said.

At the closed-door meeting on Friday, all council members are invited to attend along with a few regional countries and regional organizations, diplomats said.