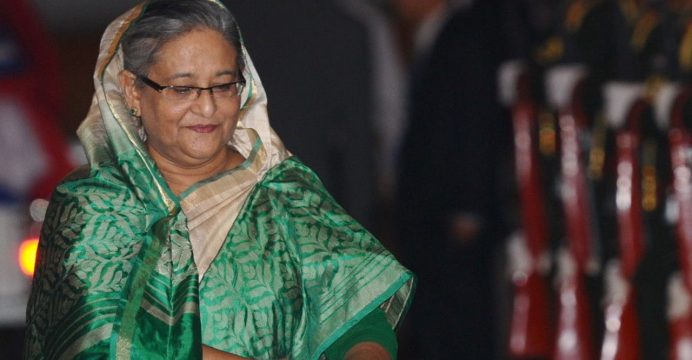 Prime Minister and Awami League President Sheikh Hasina will be accorded a mass reception on her return from the United States where she attended the 72nd session of the United Nations General Assembly (UNGA) .

Awami League (AL) and its associate bodies will organize the mass reception on behalf of the countrymen on October 7, AL General Secretary and Road Transport and Bridges Minister Obaidul Quader told journalists after a joint meeting at AL President’s political office.

“Preparations have been taken to accorder the mass reception to Prime Minister Sheikh Hasina for raising the five-point demand in the world body and mustering the support of global leaders, and to keep her role memorable,” he said. Presidents and general secretaries of all AL associate bodies, AL south and north cities’ presidents, general secretaries, and lawmakers of Dhaka city were present in the meeting.

Quader said, “We hope Sheikh Hasina will arrive at Hazrat Shahjalal International Airport at 10 am on October 7 via Sylhet. AL, countrymen and civil society will give a rousing reception to the Prime Minister at the airport.”

He added that the people will greet the Prime Minister standing on both sides of the road from the airport to Ganobhaban.

“Prime Minister Sheikh Hasina held our head high in the United Nations… Her five-point demand stirred the world community… She is now a leader of humanity,” said he.