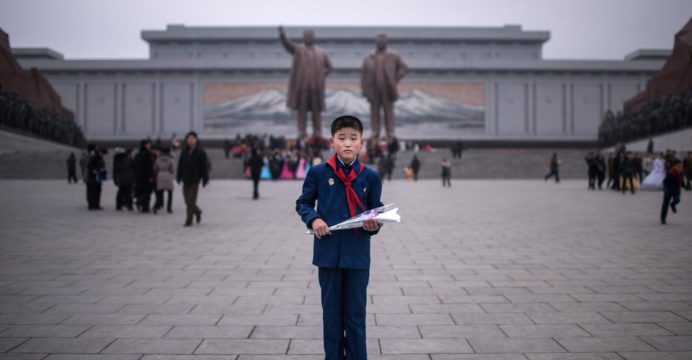 South Korea expects more provocative acts by North Korea next month to coincide with the anniversary of the founding of the North Korean communist party and China’s all-important Communist Party Congress.

In a meeting with President Moon Jae-in on Thursday, national security adviser Chung Eui-yong said he expected Pyongyang to act around Oct. 10 and 18, but gave no details.

The South Korean security adviser’s report also noted the risk of that a military conflict could by sparked by “accidental incidents,” Park Wan-ju, lawmaker and head spokesman of the ruling Democratic Party, said.

The North has accused Trump of declaring war after he warned Kim’s regime would not last if he persisted in threatening the United States and its allies, having earlier warned North Korea would be totally destroyed in such an event.

Asked whether China has a plan to respond to an emergency in North Korea, such as securing nuclear and missile sites, Chinese defense ministry spokesman Wu Qian said that “military means cannot become an option” and the issue should be resolved through talks.

“The Chinese military will make all necessary preparations to protect the country’s sovereignty and security and regional peace and stability,” he added, without elaborating.

Pyongyang conducted its sixth and largest nuclear test on Sept. 3 and has launched dozens of missiles this year as it accelerates a program aimed at enabling it to target the United States with a nuclear-tipped missile.

The United States and South Korea are technically still at war with North Korea because the 1950-53 Korean conflict ended with a truce and not a peace treaty.

China, North Korea’s main ally, would likely be extremely unhappy if Pyongyang tested a missile or carried out some other act during its Communist Party Congress, held once every five years.

Park said President Moon told the meeting that Washington and Seoul agreed that pressure needed to be applied to North Korea, with the door to talks still open.

In a separate speech on Thursday, Moon said cooperation with the international community to curb the North’s nuclear ambitions was at its highest level ever and called for the strengthening of South Korea-U.S. defenses to rein in the North.

Since the North’s latest nuclear test, countries have taken measures against the reclusive state, including the expulsion of North Korean diplomats.

Malaysia said on Thursday all its citizens are banned from traveling to North Korea until further notice due to escalating tensions on the Korean Peninsula.