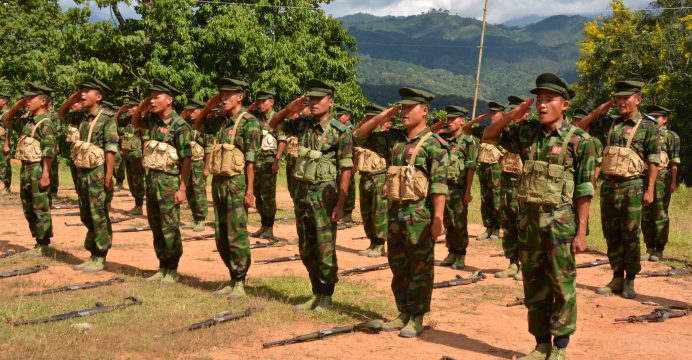 Facebook posts from Myanmar’s army detailing the opening phase of its crackdown last month on Rohingya Muslim insurgents – an operation now being probed by the United Nations – are no longer visible on its official page, Reuters found.

Posts for the period between Aug. 1 and Aug. 29 appear to have been “hidden” on the Facebook page of the office of the commander-in-chief, Min Aung Hlaing, which has covered the military’s actions, including those in western Myanmar, in detailed dispatches.

The posts, which can still be found using specific date or keyword searches, included detailed accounts of the operation launched by the army following attacks on security forces on Aug. 25.

It is unclear why, or when exactly, the posts disappeared. They were not visible on Sunday, Monday or Tuesday from several locations across Asia.

“We don’t hide anything, it might be some kind of error,” said Ministry of Defense spokesman General Aung Ye Win.

A spokesman for the military-run home affairs ministry, Police Colonel Myo Thu Soe, said he “had no idea” about the issue.

A Facebook spokesperson said it was at the discretion of page administrators to hide posts if they wished.

Around 480,000 Rohingya have fled to Bangladesh since the military counter-offensive began.

The United Nations has described the campaign as ethnic cleansing. Myanmar has rejected that accusation, saying it is waging a legitimate fight against terrorists.

A U.N.-mandated fact-finding mission is looking into “alleged recent human rights violations by military and security forces and abuses in Myanmar, in particular in Rakhine State”.

The probe includes the violence that followed the Aug. 25 attacks. It was established after a similar, smaller military operation late last year.

The official military Facebook page shows a gap of nearly a month between a post on July 31 and the next one on Aug. 30.

Like other news organizations, Reuters had used the detailed, timely postings in much of its early coverage of the August crisis.

The August posts can still be seen if searched for with a specific date or a keyword, suggesting they have not been deleted but removed from the page’s timeline using Facebook’s “hide” function.

“Keep in mind that if a post you’ve hidden was shared, it may still be visible to the audience it was shared with in other places on Facebook,” says Facebook about the function on its website. The feature can be undone by the account holder to restore the posts.

The hidden August posts include very detailed accounts of clashes with militants, often accompanied by pictures. The military first posted on the attacks on Aug. 25, attaching a map showing police posts and military base that had been attacked.

The timeline updates resume on the military page after Aug. 31, with more than 360 posts in September, mostly about operations in Rakhine.

Myawady, a media group which covers the military and publishes daily newspapers, has kept the August issues available online.