Emma Stone admits she’s never been a sports player, so when she was asked to play former world tennis No. 1 Billie Jean King in the movie “Battle of the Sexes,” the Oscar-winning actress approached it from a different direction – dancing.

King, by contrast, who pioneered the fight for equal pay in tennis more than 40 years ago, pictured herself in Stone’s position as she worked with the actress to portray her character.

“I tried to put myself in Emma’s shoes. That’s really taking a risk portraying someone who is still alive. I‘m like, ‘God, that’s a little pressure,” King said.

Stone, 28, and the 73-year-old tennis legend became good friends while making the movie that tells the story behind King’s 1973 exhibition match against former men’s champion Bobby Riggs (Steve Carell) to fight sexism in the sport and society at large. It opens in U.S. movie theaters on Friday.

Stone, who won an Oscar in February for song and dance musical “La La Land,” had never played tennis so her early sessions with King focused on footwork and choreography. 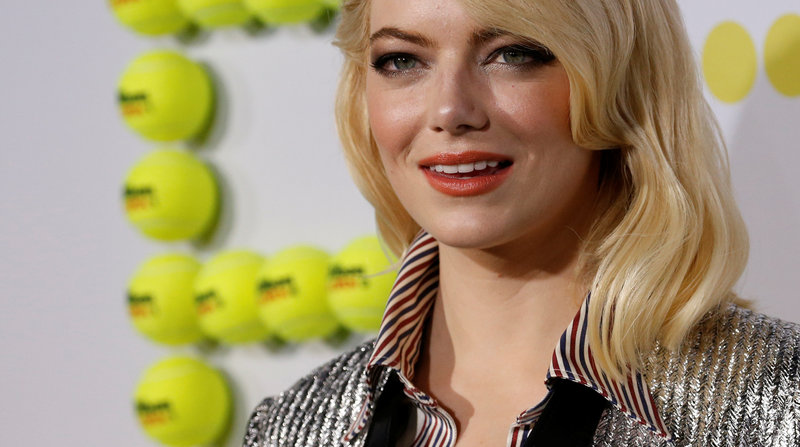 “I danced, so footwork was good. (And) I had been on stage before and when Billie Jean went out onto the tennis court it felt like her stage, so she really keyed in on that,” Stone said.

Later came weeks of practice on serves and cross-court backhands, but for Stone, even the simplest things were tough.

”We went to the U.S. Open … and I was sitting next to Billie Jean, and Sloane Stephens was catching balls and tucking them in her skirt and bouncing them with the racquet.

Professional players were hired to reproduce the shots in the match against Riggs, which was watched by more than 50 million on television.

For her part, King worked for weeks with screenwriter Simon Beaufoy recalling her experience in the early 1970s, when she not only established the break-away Women’s Tennis Association and took on Riggs but also was wrestling with her own sexual identity. She came out as gay in 1981.

More than 40 years after beating Riggs, women are still fighting for equal pay and rights on and off the tennis court, not that it comes as any surprise to King.

”If you read history, you realize how slow progress is and that it’s each generation’s job to try and move the ball forward.