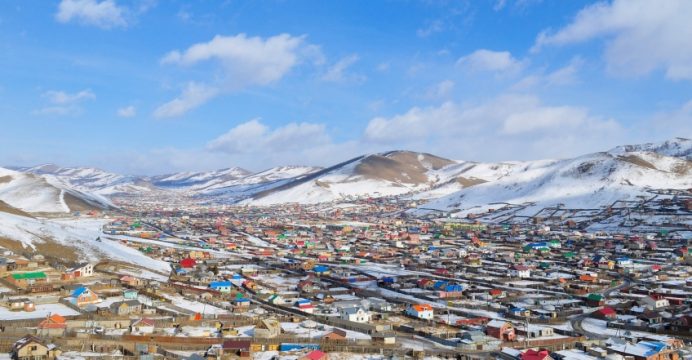 Mongolia joins UN Environment in the fight against air pollution

In a national effort to combat air pollution, Mongolia is joining forces with UN Environment by joining the BreatheLife campaign. It is the first country that in its entirety joins the campaign, taking a bold stand against the harmful health effects that air pollution has for its citizens.

Air pollution is high on the policy agenda in the Asian nation, with the average air quality in the capital Ulaanbaatar frequently measured as being 7.5 times higher than the World Health Organization’s safe limit.

The nation’s challenge with air quality includes persistent indoor sources of air pollution, such as the use of coal and wood-based cooking and heating methods, as well as outdoor sources like coal-fueled power plants and polluting sources of transportation, the burning of garbage, unpaved roads, and dust coming in from the desert

“Pollution is devastating for health, the economy and the climate. Mongolia is standing up to say that its citizens deserve a better deal,” said Erik Solheim, head of UN Environment.

“We have the solutions, and more and more cities and countries around the world are starting to see that a focus on clean air is just that: a breath of fresh air.”

By joining the campaign, Mongolia commits to take real action to bring the air quality in urban area’s back to safe levels. Supported by the organizations behind BreatheLife, they will aim to; manage fuel and emission standards in the transport and energy sectors; limit usage of raw coal for household fuel; facilitate diffusion of leading low-carbon technologies, products, systems, services, and infrastructure; support policy implementation and holistic knowledge on waste management; and inform, educate and empower citizen through public awareness campaigns.

To achieve the development of a long-term sustainable and green economy, the government of Mongolia is supported by the Partnership for Action on Green Economy (PAGE). This partnership supports nations and regions in transitioning key economic sectors into a more sustainable model by addressing inequality, create green jobs, advance green industrial development, and improve skills, knowledge and institutional capacity.