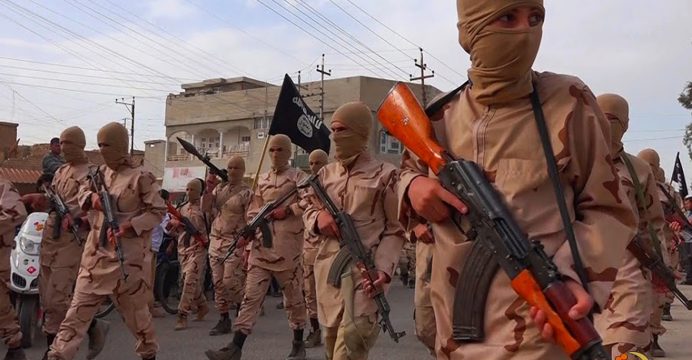 Iraqi authorities are holding 1,400 foreign wives and children of suspected Islamic State fighters in a camp after government forces expelled the jihadist group from one of its last remaining strongholds in Iraq, security and aid officials said.

Many of them say they are from Russia, Turkey and Central Asia, but there are also some from European countries, the officials said. They have mostly arrived at the camp south of Mosul since Aug 30.

An Iraqi intelligence officer said that they were in the process of verifying their nationalities with their home countries, since many of the women no longer had their original documents.

It is the largest group of foreigners linked to Islamic State to be held by Iraqi forces since they started expelling the militants from Mosul and other areas in northern Iraq last year, an aid official said. Thousands of foreigners have been fighting for Islamic State in Iraq and Syria.

A senior security officer said the authorities were trying to find a safe place to house the families while negotiating with embassies for their return home. They are not allowed to leave the camp.

Reuters reporters saw hundreds of the women and children sitting on mattresses crawling with bugs in tents in what aid workers called a “militarized site”. Turkish, French and Russian were among the languages spoken.

“I want to go back (to France) but don’t know how,” said a French-speaking veiled woman of Chechen origin who said she had lived in Paris before.

She said she did not know what had happened to her husband, who had brought her to Iraq when he joined Islamic State.

Many of the families had fled to Tal Afar after Iraqi troops pushed Islamic State out of Mosul on Aug 30.

Iraqi forces retook Tal Afar, a city of predominantly ethnic Turkmen that has produced some of Islamic State’s most senior commanders, last month. Most of its pre-war population of 200,000 have fled.

Aid workers and the authorities are worried about tensions between Iraqis, who lost their homes and are also living in the camp, and the new arrivals.

Many Iraqis want revenge for the harsh treatment they received under the extremists’ interpretation of Sunni Islam they imposed in Mosul and the other areas they seized in 2014.

“The families are being kept to one side (of the camp) for their own safety,” an Iraqi military intelligence officer said.

The Norwegian Refugee Council (NRC), which is supporting the 541 women and their children, said Iraq “must swiftly move to clarify its future plans for these individuals”.

“Like all those fleeing conflict, it is imperative that these individuals are able to access protection, assistance, and information,” NRC said in a statement. “They are in de-facto detention.”

Western officials are worried about radicalized fighters and their relatives coming home after the collapse of Islamic State’s “caliphate”.

French officials have indicated a preference for citizens found to be affiliated with IS to be prosecuted in Iraq.

“The general philosophy is that adults should go on trial in Iraq,” a French diplomatic source told Reuters last month, of those found to have been fighters. “We think children would benefit from judicial and social services in France.”