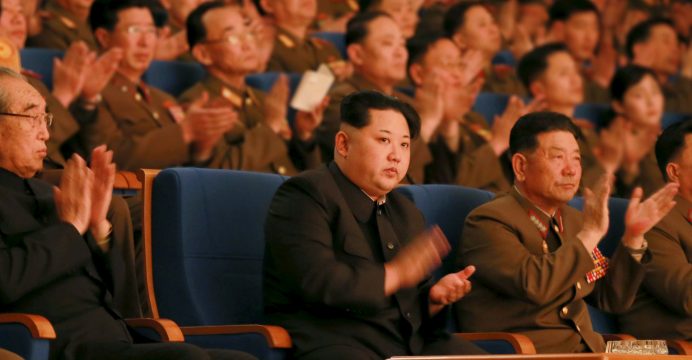 China said on Thursday it agreed the United Nations should take more action against North Korea after its latest nuclear test, while pushing for more dialogue to resolve the crisis on the Korean peninsula.

North Korea said it would respond to any U.N. sanctions and U.S. pressure with “powerful counter measures”, accusing the United States of aiming to start a war.

The United States wants the U.N. Security Council to impose an oil embargo on North Korea, ban its exports of textiles and the hiring of North Korean laborers abroad, and to subject leader Kim Jong Un to an asset freeze and travel ban, according to a draft resolution seen by Reuters on Wednesday.

Pressure from Washington has ratcheted up since North Korea conducted its sixth and largest nuclear test on Sunday. That test, along with a series of missile launches, showed it was close to achieving its goal of developing a powerful nuclear weapon that could reach the United States.

“We will respond to the barbaric plotting around sanctions and pressure by the United States with powerful counter measures of our own,” North Korea said in a statement by its delegation to an economic forum in Vladivostok, in Russia’s Far East.

U.S. President Donald Trump has urged China to do more to rein in its neighbor, which has pursued its weapons programs in defiance of U.N. sanctions and international condemnation.

“Given the new developments on the Korean peninsula, China agrees that the U.N. Security Council should make a further response and take necessary measures,” Chinese Foreign Minister Wang Yi told reporters on Thursday, without elaborating.

“Any new actions taken by the international community against the DPRK should serve the purpose of curbing the DPRK’s nuclear and missile programs, while at the same time be conducive to restarting dialogue and consultation,” he said, referring to North Korea by the initials of its official name, the Democratic People’s Republic of Korea.

China is by far North Korea’s biggest trading partner, accounting for 92 percent of two-way trade last year. It also provides hundreds of thousands of tonnes of oil and fuel to the impoverished regime.