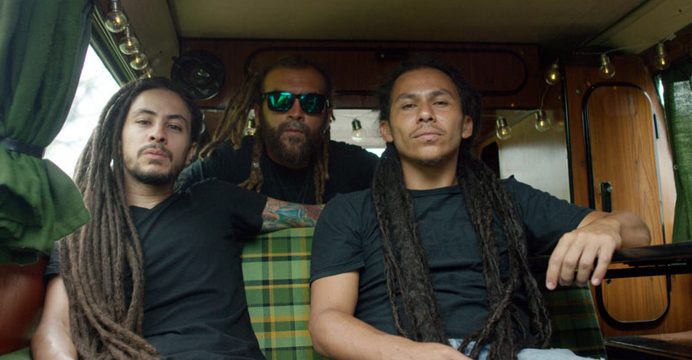 IOM, The UN Migration Agency has released the documentary, The Fable of the Lion and the Coyote, directed by Costa Rican filmmaker and producer, Miguel Gómez.

The film, divided into five chapters, tells the story of Talawa, a reggae band formed by Alonso Rojas, Gerardo Quirós, Bryan Chavarría, Francisco Barboza and Andrés Solano. The documentary is inspired by the life-threatening journey of the band and their sound engineer Juan Carlos Briceño, through Central America to the United States, without American visas, and motivated by the false expectations of a tour contract.

The documentary exhibits the risks that the group’s members faced during their two-week journey, from malnutrition to the theft of their musical instruments and death threats from a migrant smuggler. Additionally, the members describe how they almost lost their lives while trying to cross the Rio Grande River that divides Mexico and the US.

IOM, through the Mesoamerica Program, intends this documentary to alert people, especially the younger generation, on the multiple risks of irregular migration, such as sexual or gender violence, extortionate kidnapping, gang recruitment, child labour, labor exploitation, trafficking in persons and even death. “The Mesoamerican region is one of the most important migratory corridors in the world, in which persons who migrate irregularly are easy prey for networks of migrant smugglers, who take them through dangerous routes and provide them false documents, exposing them to situations that violate their human rights,” said Alexandra Bonnie, IOM Regional Coordinator of the Mesoamerica Program.

“In the first seven months of 2017, IOM registered the deaths of more than 230 migrants along the border between Mexico and the United States. We hope that the testimony of the young members of this group will contribute to the understanding of the risks associated with irregular migration that anyone can come up against,” she added.

Costa Rican filmmaker Miguel Gómez, director of Italia 90 and Maikol Jordan presented the story as a documentary series of five chapters of three to five minutes each. The first chapter can be seen here. The United Nations (UN) System supported the dissemination of the documentary through its Facebook account, and by integrating it into the TOGETHER campaign, which promotes the respect, security, and dignity of refugees and migrants.

InformArte en Movimiento is another awareness-raising campaign by IOM in Mesoamerica that seeks to prevent the risks of irregular migration, with a special focus on children and adolescents.

This documentary was possible thanks to the support of the IOM Mesoamerica Program, financed by the Bureau of Population, Refugees and Migration of the US Department of State. This programme aims to strengthen the capacities of government and civil society organizations to improve the protection and assistance of migrant people in situations of vulnerability.