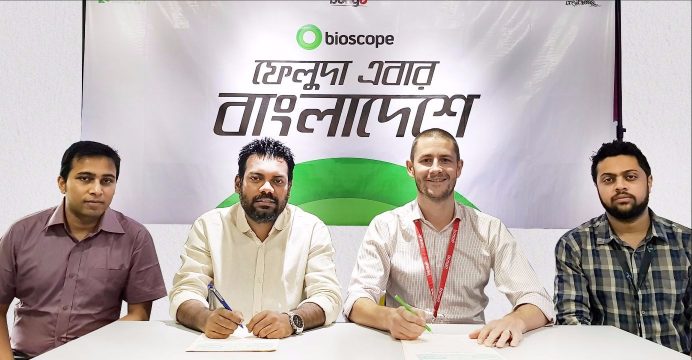 Grameenphone becomes the digital partner of Feluda in Bangladesh

Imagine you are trapped in an impossible situation from where you can be rescued only if you are able to solve a set of complex riddles. In such a circumstance, who do you ask for help?

Any Bengali you ask this question would almost certainly answer – ‘Feluda’! Such is the respect and admiration fostered by the Bengalis on the charismatic genius sleuth developed by the legendary film maker and fiction writer Satyajit Ray.

Till date, the character has appeared in 18 short stories and 17 novels by Satyajit Ray. Satyajit Ray has himself directed two films based on “Sonar Kella” (1974) and “Joy Baba Felunath” (1979). After that, his son Sandip Ray has directed 5 films and 10 TV films on Feluda’s adventures. Although played by stellar actors over the years, perhaps the most iconic portrayals of the detective were donned by veteran actors Soumitra Chatterjee and Sabyasachi Chakraborty.

Taking a massive turn from the pages of the good old books, TV series; the legendary creation of Satyajit Ray, Pradosh C. Mitter aka Feluda is all set to return with a bang promising, even more, thrills and adventures. Parambrata Chatterjee, the highly adored movie superstar will star as Feluda and Hridhi Sen will play the role of Topshe, his faithful sidekick. And the best part is that Feluda is going to solve mysteries right here in Bangladesh!

This Eid ul Adha, as a gift to all the Feluda fans out there, Bioscope, Grameenphone’s video streaming platform, is bringing this new web series for all the fans out there. Kandy Production Ltd. and Bongo-stellar Digital Ltd. have signed an agreement regarding this matter on 22nd August. Shahriar Shakil, Managing Director of Kandy Production Ltd. and Karel Kuiperi, Head of Content of Bongo-Stellar Digital Ltd., signed the agreement on behalf of the respective organizations during an event held at Grameenphone’s head office ‘GP House’. Rafael Mahbub, Product Manager, Bioscope, Grameenphone, was present on the occasion representing Bioscope. Shikdar Wahiduzzaman, Media Manager, Kandy Production Ltd., was also present.

‘Feluda is undoubtedly one of the most iconic Bengali characters ever created. There is hardly an educated Bengali who has not heard of Feluda, and hardly a book lover who has not read at least one story of the legendary detective. I personally am a huge fan of the character and its architect – Satyajit Ray. This time, we are going to see Feluda solve cases right here in Bangladesh. The highly talented ensemble cast both from Bangladesh and West Bengal, and a carefully weaved story produced by skilled personnel who love Feluda promises to deliver an audiovisual experience to remember,’ said Mohammad Muntasir Hossain, Head of Digital Entertainment at Grameenphone.

The new Feluda series, comprised of four episodes in its first season, will be an exclusive content of Bioscope and for the fans of Feluda; ‘Bioscope Live TV’ app is waiting in the Play store for you to download. The episodes will also be available on the Bioscope website. So brace yourselves to witness this amazing detective series filled with action, mystery, and drama.