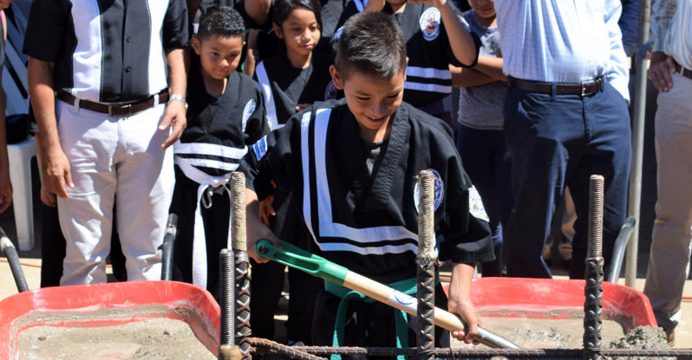 IOM, the UN Migration Agency, the US Agency for International Development (USAID) and local authorities have begun the construction of a communal house as well as several spaces for sports and recreation for returned migrants in the municipalities of San Miguel and Usulután.

The Agencies have also carried out construction projects in Zacatecoluca. All these actions benefit 78 communities and more than 9,000 families within the three municipalities, and are aimed at contributing to social cohesion, community development and the reintegration processes of returnees. According to official sources, from January to June 2017, the municipalities with the largest number of returnees were San Salvador (2,413), San Miguel (1,722) and Usulután (1,467). San Miguel and Usulután were selected for these projects based on migration flows data registered within its territories, as well as their link with the plan “El Salvador Seguro”.

Many returnees suffer from growing discrimination in El Salvador. Upon arrival, they are often associated with organized crime and delinquency. This makes it difficult for them to reintegrate into their home communities, and it may cause recidivism into irregular migration. “We are convinced that the challenges resulting from stigmatization and discrimination experienced by neglected populations must be consistently addressed from various perspectives. We have to generate well-ordered environments within these communities to ensure that migrants can build up networks which will help them to be reintegrated, this is why it is a priority for us,” said Peraza. “In this manner, we will also contribute to gain visibility in all positive contributions made by returnees in their communities of origin, transit and destination,” added Peraza. “With this project, we will have more options for every sport activity, more options for returnees to join groups, more options for reintegrating young people, better infrastructure for training and for protection from sun exposure, all of this is great!” said Alejandra Mendoza, a 12-year-old student at the Municipal Basketball Initiation School of Usulután.

As a part of IOM’s Strategy of Return and Reintegration in Communities, the implementation of the infrastructural improvements includes community participation through focus groups with special emphasis on young people and women. The strategy also includes the fight against stigmatization towards returnees and the prevention of irregular migration and social violence.

The inauguration took place as part of IOM’s Return and Reintegration Programme in the Northern Triangle of Central America, funded by USAID and coordinated by municipal authorities, community organizations and local leaders.