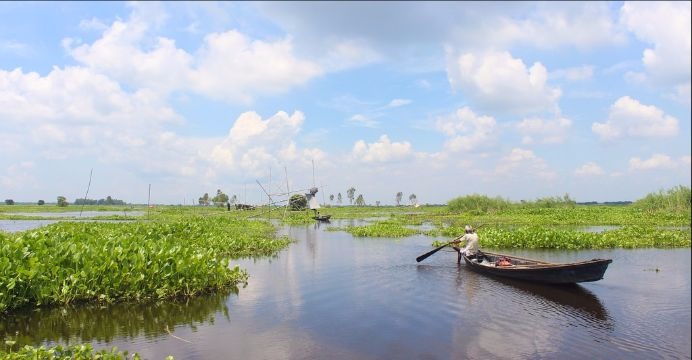 Arial Beel: A hub of natural beauty and resources in Bangladesh

Arial Beel is the second largest wetland of Bangladesh which covered with a large water body of 136 square kilometers situated in the south part of Dhaka between the two major river Padma and Dhaleswari at Srinagar upazilla under Munshiganj district.

The 1,66,000 acres of cultivate land where there is no uncultivated land, surprisingly gets changed its feature season to season , specially turns a unique level during winter .

However, the opportunity came to visit Arial Beel last week with some of my fellows who are students of Jagannath University. The plan was set earlier but rain obstructed every time. At last, we able to set out in dry weather from our university campus. We were around 50-55 students while two of our teachers took part with us. All of us were belonged to Munshiganj District and the whole tour was organised by the Bikrampur Munshiganj Students Welfare Association, a student association of Munshiganj district who study in Jagannath University. A bus has been named after “Arial” according to Arial Beel on belaf of students of Munshiganj who travel by Dhaka-Mawa highway.

Being away around 30 kilometers  from Dhaka, it is possible to visit Arial Beel within a day. Our bus started at 3 pm from campus. After 25 minutes we crossed Postogula bridge and began to on Dhaka-Mawa highway aiming at Hasara of Srinagar upazilla. We reached there by 4.20 pm near Alampur bazar. There many trawlers available beside the bazar to travel Arial Beel. As soon as we sat down on a trawler, the rain began.

However, the trawler started by way of Arial Beel from Alampur Bazar ghat at 4.30 pm. Now, the tradition of Munshiganj is moving ahead by the rivers of Ichhamati river. The rain was dropping on the river making mind-blowing tune, seems to play falling down on the river.

Meanwhile, Nahid Islam, one of our fellows whose house in this area, initiating the history of the Ichhamati river which flows through the Alampur area – “Brother, this is not river but it is the canal. It is said that King Raj Ballabh Roy of Rajanagar, who was consigned to Padma, digged the canal. Raj Bollaw Roy was the associate of Alibardi khan. The canal from Saidpur has been merged with the Padma passed through Srinagar on the Arial Bill from Rajnagar, Shekarnagar, Alampur to the south. ”

However, after sometime our trawler crossed the canal and entered into the huge wetland of Arial.

Arial beel is a huge wetland. Ten thousands of people live on this beel’s natural resources. After the monsoon is over, the region is filled with diverse fruits and crops. Farmers don’t use any fertilizer here because the soil is very fertile.

Nothing has changed in the Arial beel. It’s been the same for the last century with its unique diversity – it has been contributing endlessly, changing the fate of millions. Arial beel is the true representation of Bangladesh where we see enrichment of fish in the water body and guarantee of crops as soon as you sow seeds.

The entire Arial beel region is filled with thick silts. Though two big rivers flow right near the beel, the rainy season’s water stays on to create seasonal floods. Since the two rivers have full water flow during the monsoon, the Arial beel gets waterlogged – the water can’t drain out. The difference between Chalan and Arial beel is during dry season, most lands in Chalan beel remain dry, and the lands in Arial beel remain wet all the time.

The bigger ponds of the Arial beel are known as ‘denga’ which are literally gold mines of local fish. Fishes live here as these are their very own home. There are many stories about the thousands of dengas in the Arial beel.

There are as many as 2000 dengas over the Arial beel. During monsoon time, the drains are opened for the fishes to go into the Arial beel. And, we heard from the fishermen that these fishes come back to their very own dengas after they’re grown in the Arial beel naturally for a year. This is the beautiful mystery of nature. We also heard that the exact number of fishes returned to their own dengas- quite surprising to me, though they claim it strongly.

Fishermen were wrapping up the net. They fastened eleven nets together and slowly all of formed into one large net full of fishes.Nets came really close. I saw the fishes on the wing. Fresh and sparkling small fishes were selected from the water plantains. Chanda, Mrigel, Katla, Rui, Kalibaush, Pholi and so many other varieties of pure local fishes were netted. Do remember, these fishes are not farmed fish, they’re grown in the hands of nature, eating the food provided naturally.

The people we talked with at the Arial Beel, they can not only be defined as fisher, fish farmer, paddy farmer, agricultural laborer- they are the ones who have the blessings of Arial Beel.

Although there are stories of crisis, the people from this region are living with the unlimited blessing given free by nature. These people have also given their full effort to keep the nature as it is. It’s a safe home for all the elements of nature, snakes, worms, grasshoppers, tiny and big birds everything live in a harmony in this kingdom of nature. That is why you get plenty of fishes, crops as well as pure flavor of nature all over the lands. We hope and expect Arial Beel will remain the same forever. Let the nature sleep on the heart of nature itself, only then earth will become a real habitat.

Md Mehedi Hassan is an undergraduate student of Political Science at the Jagannath University, Dhaka, Bangladesh. He is an Enthusiast in writing and journalism.
No Comments