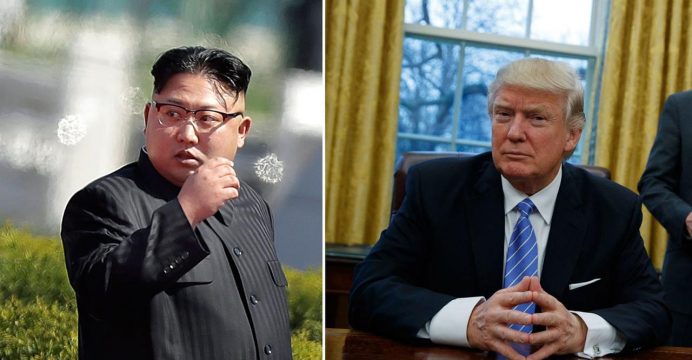 President Donald Trump issued a new threat to North Korea on Friday, saying the U.S. military was “locked and loaded” as Pyongyang accused him of driving the Korean peninsula to the brink of nuclear war and world powers expressed alarm.

The Pentagon said the United States and South Korea would proceed as planned with a joint military exercise in 10 days, an action sure to further antagonize North Korea. Meanwhile, Russia, China and Germany voiced dismay at the escalating rhetoric from Pyongyang and Washington.

Trump, vacationing at his Bedminster, New Jersey, golf resort, kept up the war of words and again referenced North Korea’s leader in his latest bellicose remarks toward Pyongyang this week. “Military solutions are now fully in place, locked and loaded, should North Korea act unwisely,” he wrote on Twitter. “Hopefully Kim Jong Un will find another path!”

The term “locked and loaded,” popularized in the 1949 war film “Sands of Iwo Jima” starring American actor John Wayne, refers to preparations for shooting a gun.

Friday’s tweet by the Republican president, a wealthy businessman and former reality television personality, came shortly after the North Korean state news agency, KCNA, put out a statement blaming him for the boiling tensions.

“Trump is driving the situation on the Korean peninsula to the brink of a nuclear war, making such outcries as ‘the U.S. will not rule out a war against the DPRK (North Korea),'” KCNA said.

“OVER THE TOP” RHETORIC

Lavrov said the risks of a military conflict over North Korea’s nuclear program are very high and Moscow is deeply worried by the threats from Washington and Pyongyang.

“Unfortunately, the rhetoric in Washington and Pyongyang is now starting to go over the top,” Lavrov said on live state television at a forum for Russian students. “We still hope and believe that common sense will prevail.”

Tension in the region has risen since reclusive North Korea staged two nuclear bomb tests last year and launched two intercontinental ballistic missile tests in July in defiance of world powers. Trump has said he would not allow Pyongyang to develop a nuclear weapon capable of hitting the United States.

KCNA said on Thursday the North Korean army would complete plans in mid-August to fire four intermediate-range missiles over Japan to land in the sea 18 to 25 miles (30-40 km) from Guam. The U.S. Pacific island territory is home to a strategically located U.S. air base, a Navy installation, a Coast Guard group and roughly 6,000 U.S. military personnel.

U.S. Secretary of State Rex Tillerson, a day after returning from an Asia trip that included a stop in Guam, was set to meet with Trump and U.S. Ambassador to the United Nations Nikki Haley in Bedminster on Friday.