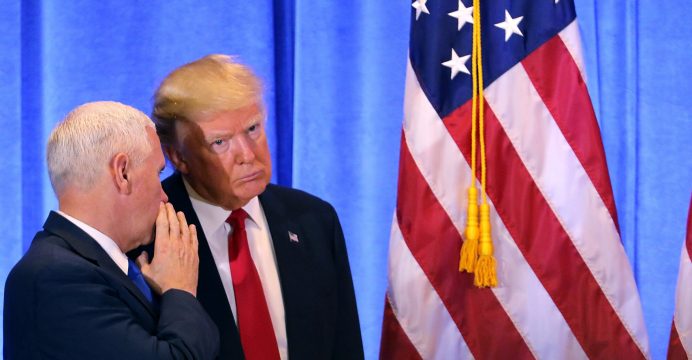 U.S. Vice President Mike Pence on Sunday denied that he is preparing for a presidential election run in 2020, saying the suggestion is “disgraceful and offensive.”

Pence was responding to a New York Times report that some Republicans were moving to form a “shadow campaign” as though President Donald Trump were not involved. It said multiple advisers to Pence “have already intimated to party donors that he would plan to run if Mr. Trump did not.”

The report said Pence had not only kept a full political calendar but also had created his own independent power base, including a political fund-raising group called the “Great America Committee.”

But Pence called the article “fake news” and said his entire team was focused on advancing Trump’s agenda and seeing him re-elected in 2020, reports Reuters.

“The allegations in this article are categorically false and represent just the latest attempt by the media to divide this Administration,” Pence said in a statement.

The Times stood by its coverage. “We are confident in the accuracy of our reporting and will let the story speak for itself,” New York Times spokeswoman Danielle Rhoades Ha said in an email.

Pence has good relations with conservative political groups and some of the Republican Party’s big donors, including billionaire brothers Charles and David Koch.

He is also a Trump loyalist, and there is typically little distinction between his public statements and the policies of the president.

But as investigations deepen into Russia’s alleged interference in the 2016 U.S. election and possible ties to members of Trump’s campaign, Pence has put some distance between himself and the president on the best way to approach Moscow.

On a trip to Eastern Europe last week, Pence condemned Russia’s presence in the former Soviet republic of Georgia, with which Moscow fought a brief war in 2008. He also said ties with Russia would not improve until Moscow changed its stance on Ukraine and withdrew support for countries like Iran, Syria and North Korea.

The U.S. Congress recently passed a bill imposing new sanctions on Russia with overwhelming bipartisan support, but Trump signed it into law last week with reluctance.

“Our relationship with Russia is at an all-time & very dangerous low,” Trump wrote on Twitter after signing the bill. “You can thank Congress.”

Trump has described probes into his campaign’s ties to Russia, including those under way in Congress and a Justice Department investigation headed by Special Counsel Robert Mueller, as a “witch hunt.”

The president has also sent mixed messages on whether he agrees with U.S. intelligence agencies’ conclusions that Russia tried to intervene in the 2016 election to boost his chances of beating Democratic rival Hillary Clinton.

White House senior counselor Kellyanne Conway on Sunday also dismissed the idea that Pence was looking at running for president in 2020.

“It is absolutely true that the vice president is getting ready for 2020 – for re-election as vice president,” Conway told ABC’s “This Week” on Sunday.