The Lightning Bolt was back on the track where he struck triple Olympic gold, but his start, even by his own sluggish standards, frighteningly sedated. Incomparable Usain Bolt seeks to win the World Championships 100 meters gold for the fourth time.

Drawn in the sixth and final heat, Usain Bolt did not exactly have a disastrous reaction time (0.166) but after leaving his blocks proceeded to stand bolt upright, as it were.

The Jamaican will need to start better than in Friday’s heats but remains hot favorite to triumph at London Stadium in his final individual race.

The 100m and 200m world record-holder crossed the line first in 10.07 – ahead of Britain’s James Dasaolu (10.13) and joint European record-holder Jimmy Vicaut of France (10.15) – then shook his head, clearly unimpressed with his efforts. 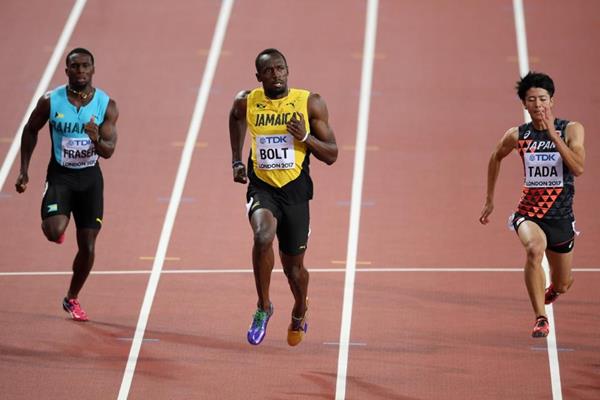 After Briton Mo Farah won the first gold of the championships in a superb men’s 10,000 meters on Friday, it is the women’s turn for the 25-lap event on Saturday.

Olympic champion and world record-smashing Almaz Ayana and fellow Ethiopian triple world champion Tirunesh Dibaba look the obvious favorites but both have been injured and barely raced this season so things are not cut and dried.

There are also golds up for grabs in the men’s discus and men’s long jump and the semi-finals in a stellar-quality women’s 1,500m.

The action gets underway at 10:05am local time with the opening discipline of the heptathlon, the 100m hurdles.