Mo Farah launched the World Athletics Championships in scintillating fashion on Friday with another consummate 10,000 meters triumph that further embellished his claim to being the greatest distance racer in the sport’s history, reports Reuters.

The Kenyans and Ugandans threw everything at Mo Farah over the first nine kilometres of the 10,000m final but the reigning champion still found himself in the position where he is at his most dangerous and virtually unbeatable: at the front with 800m remaining.

With 55,000 of his home fans roaring their support at the London Stadium, the 34-year-old Briton sprinted away with his 10th consecutive gold medal in a global track final, a dazzling sequence that ranks among the greatest feats in sport. 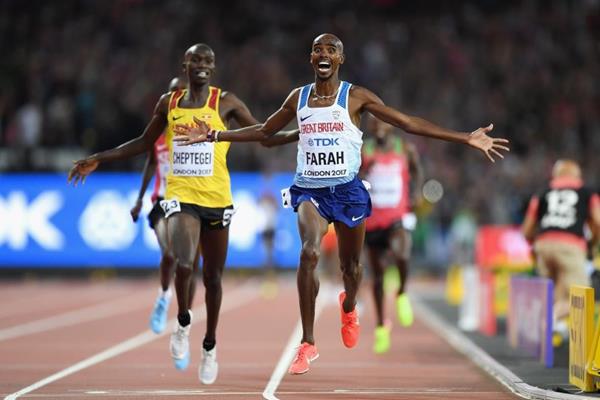 Farah survived being clipped twice from behind in the final lap, nearly tripping over and being forced to take a step off the track, and he ended with cuts and bruises to his “bad legs” that needed treatment.

Yet still he was able to unleash one more trademark burst down the home straight to speed away from Uganda’s Joshua Cheptegei and Kenya’s Paul Tanui.

The Briton clocked 26 minutes 49.51 seconds, the world’s fastest time in 2017, in what proved perhaps the hardest-earned of all his magnificent triumphs as he protected his six-year unbeaten streak in major championships. 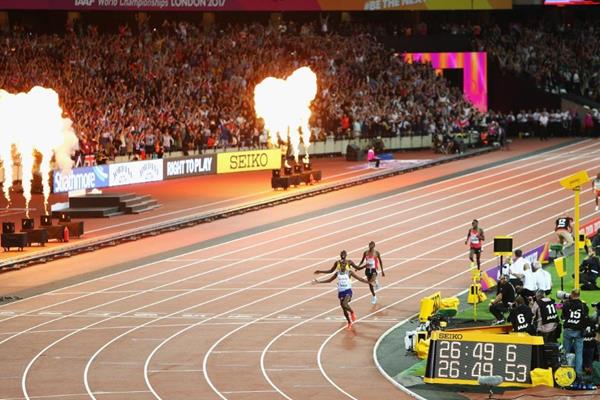 Yet, five years to the very night when he won the 25-lap title at his home Olympics on “Super Saturday” in the same London Stadium, Farah had still not lost that invincible aura, clocking a searing 55.63 seconds for the last lap in spite of his stumbles.

It was the perfect way for him to begin his final championship as a track runner before he turns his attentions to the roads as a marathon man.