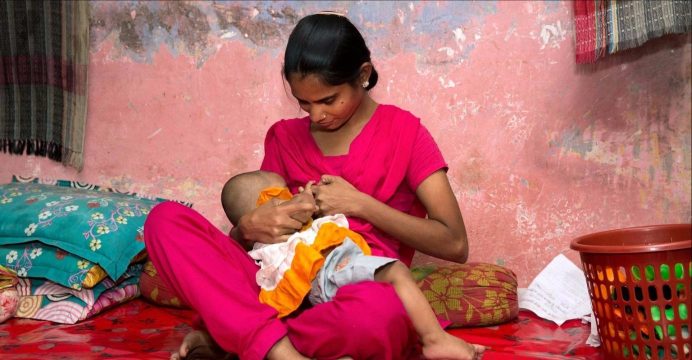 Babies and mothers worldwide failed by lack of investment in breastfeeding

No country in the world fully meets recommended standards for breastfeeding, according to a new report by UNICEF and the World Health Organization (WHO) in collaboration with the Global Breastfeeding Collective, a new initiative to increase global breastfeeding rates.

The Global Breastfeeding Scorecard, which evaluated 194 nations, found that only 40 per cent of children younger than six months is breastfed exclusively (given nothing but breast milk) and only 23 countries have exclusive breastfeeding rates above 60 per cent.

Evidence shows that breastfeeding has cognitive and health benefits for both infants and their mothers. It is especially critical during the first six months of life, helping prevent diarrhoea and pneumonia, two major causes of death in infants. Mothers who breastfeed have a reduced risk of ovarian and breast cancer, two leading causes of death among women.

Zainab Kamara, supported by her mother, breastfeeds one of her twin sons, 3-month-old Alhassan Cargo, in Karineh Village in Magbema Chiefdom, Kambia District

“Breastmilk works like a baby’s first vaccine, protecting infants from potentially deadly diseases and giving them all the nourishment they need to survive and thrive.”

The scorecard was released at the start of World Breastfeeding Week alongside a new analysis demonstrating that an annual investment of only US$4.70 per newborn is required to increase the global rate of exclusive breastfeeding among children under six months to 50 per cent by 2025.

Nurturing the Health and Wealth of Nations: The Investment Case for Breastfeeding suggests that meeting this target could save the lives of 520,000 children under the age of five and potentially generate US$300 billion in economic gains over 10 years, as a result of reduced illness and health care costs and increased productivity.

“By failing to invest in breastfeeding, we are failing mothers and their babies – and paying a double price: in lost lives and in lost opportunity.”

The investment case shows that in five of the world’s largest emerging economies—China, India, Indonesia, Mexico, and Nigeria—the lack of investment in breastfeeding results in an estimated 236,000 child deaths per year and US$119 billion in economic losses.

Globally, investment in breastfeeding is far too low. Each year, governments in lower- and middle-income countries spend approximately US$250 million on breastfeeding programs; and donors provide only an additional US$85 million.

The Global Breastfeeding Collective is calling on countries to:

• Increase funding to raise breastfeeding rates from birth through two years.
• Fully implement the International Code of Marketing of Breast-milk Substitutes and relevant World Health Assembly resolutions through strong legal measures that are enforced and independently monitored by organizations free from conflicts of interest.
• Enact paid family leave and workplace breastfeeding policies, building on the International Labour Organization’s maternity protection guidelines as a minimum requirement, including provisions for the informal sector.
• Implement the Ten Steps to Successful Breastfeeding in maternity facilities, including providing breast milk for sick and vulnerable newborns.
Improve access to skilled breastfeeding counseling as part of comprehensive breastfeeding policies and programs in health facilities.
• Strengthen links between health facilities and communities, and encourage community networks that protect, promote, and support breastfeeding.
• Strengthen monitoring systems that track the progress of policies, programs, and funding towards achieving both national and global breastfeeding targets.

Breastfeeding is critical to the achievement of many of the Sustainable Development Goals. It improves nutrition (SDG2), prevents child mortality and decreases the risk of non-communicable diseases (SDG3), and supports cognitive development and education (SDG4). Breastfeeding is also an enabler to ending poverty, promoting economic growth and reducing inequalities.