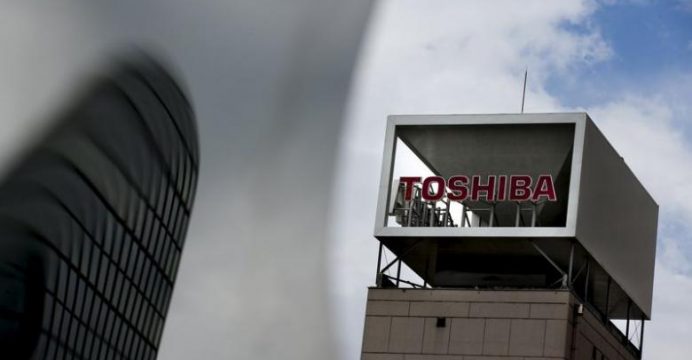 A request to block Toshiba from raising much-needed cash by selling a flash memory venture was taken off the table on Friday in a California court.

Toshiba and Western Digital agreed to an order recommended by a state court judge who asked the companies to collaborate on an agreement instead of dueling over an injunction requested by the US company, reports BSS.

The agreement requires Toshiba to publicly announce the signing of any deal to sell the venture, and provide Western Digital notice two weeks before any such sale closes, according to the Japanese company. The notice would give Western Digital time to react in court or with an arbitration panel.

“We are very pleased to have reached this mutually acceptable understanding which is effective for a very limited time and which recognizes Toshiba’s right to negotiate and sign a definitive agreement for the sale of its memory business,” Toshiba Corporation senior executive vice president Yasuo Naruke said in a release announcing the stipulated agreement.

Toshiba expected that consummating such a deal would take months. The agreement is to remain in effect until 60 days after an international arbitration panel has been created to consider the matter.

While the battle playing out in a San Francisco court has captured attention, the clash between the companies is expected to be resolved in arbitration.

“We don’t expect to close a deal during the period addressed in the order,” Toshiba said in a released statement.

“Toshiba, therefore, remains focused on preparing for the ICC (Chamber of Commerce) arbitration process, which we believe is the appropriate venue to address these issues.”

The hearing Friday was held to consider a request by Western Digital for an injunction stopping Toshiba from selling interests in three NAND flash-memory joint ventures operated with Western Digital’s SanDisk subsidiaries.

Toshiba was free to continue negotiations for the sale of the chip division as the matter made its way to likely arbitration in an international forum.

Western Digital said in a release that the agreement protects SanDisk’s interests while waiting to face off with Toshiba in international arbitration.

“Our ongoing discussions with Toshiba and its stakeholders have been constructive, and we will continue to work to seek a solution that is in the best interests of all parties,” Western Digital said in a release.

Toshiba shares got a boost this month with news that US hedge fund Greenlight Capital has taken a new stake in the troubled conglomerate.

It is wagering Toshiba shares will rise once it exits money-losing contracts tied to its Westinghouse US nuclear business, which filed for bankruptcy protection in March, the fund said in a letter to clients.

Greenlight also said at the time that it believes Toshiba can resolve the legal dispute over a sale of its memory chip business that is meant to shore up its balance sheet.

Toshiba is the world’s number-two supplier of memory chips, behind South Korea’s Samsung. The chip unit sale is seen as key to Toshiba’s turnaround. Western Digital, which jointly runs a key chip plant in Japan, opposes the sale.

Toshiba’s chief executive had blasted the US firm’s bid for a court injunction as “unfair interference.”

Toshiba later said it has filed a 120 billion yen ($1 billion) lawsuit against its US partner over the disputed deal.