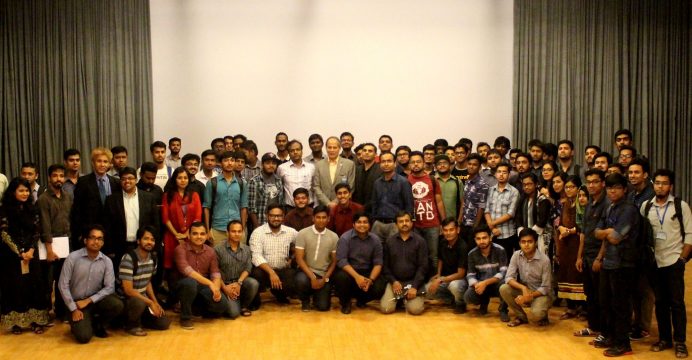 Grameenphone and different local chapters of IEEE (Institute of Electrical and Electronics Engineers) jointly organized a session titled “The Role of IoT (Internet of Things) in a Smart City Connected Community”. The program was held at GPHOUSE in Dhaka, Bangladesh on July 4, 2017.

Keynote speaker of the session  Dr. Saifur Rahman, Professor at Virginia Tech USA, described different phases of Smart City connectivity and how such technology can conserve electricity and other resources.

The interactive session was attended by Grameenphone employees, several local entrepreneurs, and a large number of invited students and faculty members from Bangladesh University of Engineering and Technology (BUET), North South University, Independent University of Bangladesh (IUB), and a few other universities. Dr. Shaikh Anowarul Fattah, Professor in the Dept. of EEE of BUET, highly appreciated this initiative from Grameenphone and expressed strong hopes to accelerate similar progressive collaborations between industry and academic arena, in accordance with Grameenphone’s continuous commitment of empowering societies.

Dr. Saifur Rahman is the first ever Asian to get elected as the President of the IEEE Power and Energy Society. Professor Rahman, who graduated from BUET in the 1970s, owns an outstanding versatile career as an academician, professional leader, innovator (including several crucial projects with US government) and speaker (in over 30 countries) spanning over the last four decades.