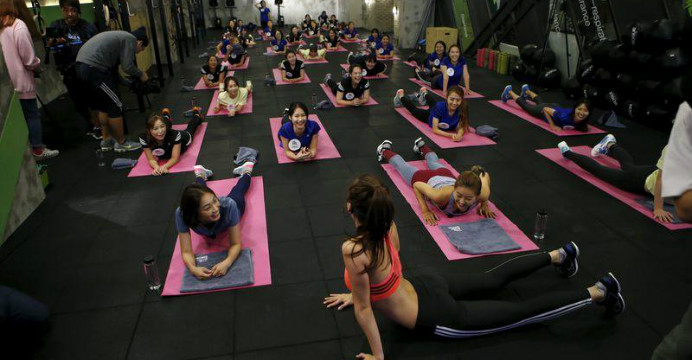 A self-help approach to a graded exercise program, supervised by a specialist physiotherapist, is safe and may reduce fatigue for some people with chronic fatigue syndrome (CFS), according to a new trial of 200 people published in The Lancet. The intervention, undertaken over 12 weeks, had a smaller effect on reducing physical disability.

The self-help intervention (guided graded exercise self-help, or GES) involves slowly and safely building up physical activity levels (eg. a few minutes walking) after establishing a daily routine, with the support of a specialist physiotherapist over the phone or Skype™.

The self-help approach means that patients do not need to travel to a clinic, and the authors say the intervention might be useful as an initial treatment for patients to help manage the symptoms of CFS.

CFS affects about seven in 1000 people and is characterized by chronic, disabling fatigue in the absence of an alternative diagnosis. Based on previous trials, UK guidelines recommend graded exercise therapy and cognitive behavior therapy for patients with CFS. However, graded exercise therapy is usually delivered in a clinic by specialist therapists with up to 15 sessions over 3-6 months, so it can be expensive to deliver and access to clinics providing these treatments is limited.

Participants in the GES group were given a self-help booklet describing a 12-week, 6-step program (developed with patient input) to gradually and safely increase physical activity levels. During the first 8-weeks, participants in the GES group were also given up to four guidance sessions with a specialist physiotherapist over the phone or Skype™ to discuss progress and so that the physiotherapist could provide feedback and answer any questions.

In GES, patients first stabilize a routine to spread usual daily activities throughout the week. Once a routine is established, patients choose a physical activity they would be able to do on 5 days per week in addition to usual daily activities. Most people chose walking, and it could be for a little as one minute per day. Once this is consistently achieved, participants then start to make a small increase (no more than 20% per week) in the time they spend being physically active.

For instance, someone walking for 5 mins a day would increase that to 6 mins a day. The time spent being active is slowly increased, and later on the intensity (eg. walking a bit faster). Importantly, if participants feel their symptoms increase after an incremental change in physical activity, they are advised by their specialist physiotherapist to maintain that activity level for longer than a week, until the symptoms have settled, before considering another increase.

All participants completed questionnaires to assess their levels of fatigue and physical function at the start of the trial and at 12 weeks, roughly 4 weeks after the GES guidance with the physiotherapist had ended. Nearly half (42%) of the participants in the GES group adhered to the program well or very well.

When rating their overall health, about 1 in 5 people in the GES group (18% [17/97]) reported feeling “much better” or “very much better”, compared to 1 in 20 (5% [4/101]) in the control group. This suggests that the self-help approach helped more people than specialist medical care alone, but still only helped a minority of patients to feel much better.

There were no reports of any serious adverse reactions to GES, after scrutiny by independent clinicians. When rating their overall health, only one person out of 97 participants reported feeling “much worse” or “very much worse” in the GES group, compared to eight people (8/101) in the specialist medical care group.

More participants in the GES group dropped out of the study compared to the specialist medical care group (10 vs. 2). Assuming that all participants who dropped out got worse, there was no significant difference in worsening symptoms between the two groups. Of the people who completed the GES program, 85% were moderately or very satisfied.

Dr Lucy Clark, lead author, Queen Mary University of London, UK, said: “We found that a self-help approach to a graded exercise programme, guided by a therapist, was safe and also helped to reduce fatigue for some people with chronic fatigue syndrome, suggesting that GES might be useful as an initial treatment for patients to help manage symptoms of chronic fatigue syndrome. We are now looking at whether the effects were maintained beyond 12 weeks.”

“Graded exercise focusses on improving routines and changing physical activity patterns, and it may even require an initial reduction in activity. The aim is to progress carefully to improve, under the supervision of a CFS-experienced therapist, rather than pushing people too hard and towards a setback. Offering the therapy as a self-help approach, supervised by a physiotherapist, could increase access and avoid the fatiguing effects of travel for the intervention.”

Participants involved in the trial were diagnosed according to NICE criteria, most commonly used by UK clinicians. Subsequent analyses found that the findings were similar when other diagnostic criteria were applied. The findings apply only to patients with CFS who are diagnosed in UK secondary care and referred for therapy. Research in other health care settings will be needed to test whether the same is found elsewhere.

The authors note that the participants and the therapists necessarily knew which treatment they were receiving, but the statistician analyzing the results did not. The outcomes including fatigue, physical function, overall health and symptoms of chronic fatigue were all self-reported using validated questionnaires commonly used in clinical trials.