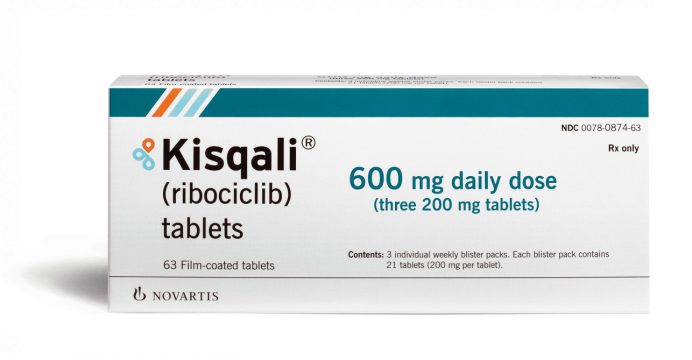 Kisqali got the U.S. Food and Drug Administration’s blessing in March. This latest CHMP opinion sets the stage for likely European Commission approval this year.

Friday’s announcement, while expected, underscores Novartis’s push to strengthen an oncology portfolio hurt last year by the patent expiration on blood cancer drug Glivec, exposing what was once its top-selling medicine to growing generic competition.

The recommendation is also the latest in a wave of upbeat news on the Basel-based drugmaker whose CEO, Joe Jimenez, has pledged to restore growth in 2018.

Novartis also won a U.S. Supreme Court ruling this month that will speed its biosimilar copies of other name-brand drugs to market.

Novartis considers Kisqali to be among a dozen new medicines with blockbuster potential. Analysts see global annual sales reaching $1.5 billion by 2022, Thomson Reuters data shows. Its shares fell about 0.9 percent by midday after hitting a 17-month high on Thursday.

Ibrance, on the market since winning accelerated approval from the FDA in 2015 and European approval last November, hit about $2.1 billion in sales in 2016.

Novartis has priced Kisqali competitively with Ibrance in the United States and is offering co-packaging with hormone therapy letrozole, which it also sells, to kick-start sales.

Ibrance and Kisqali block enzymes known as cyclin-dependent kinases 4 and 6. They are designed for use in combination with existing drugs in women whose tumors grow in response to oestrogen and whose cancer is not caused by the HER2 protein.

Still, some analysts have expressed concern that additional patient monitoring required by the FDA on concern over heart and liver problems linked to Kisqali could dent uptake.