Tsonga bounces back at Queen’s after French Open shock

Jo-Wilfried Tsonga returned emphatically to winning ways in the Queen’s Club Championships in London on Monday, putting his shock first round exit at his home French Open firmly behind him.

Tsonga outplayed his compatriot Adrian Mannarino 6-2 6-2 in the opening round of the traditional Wimbledon warm-up event in his first match since suffering a four-set defeat by little-known Argentine Renzo Olivo at Roland Garros.

The loss to the world number 91 Olivo had been particularly disappointing for Tsonga in light of his three-title season during which he also reckoned that becoming a new father had helped provide him with fresh inspiration on court.

Yet even while never needing to find top gear in the sunshine, the two-time Wimbledon semi-finalist demonstrated why he could still be a threat on the grass at 32 as he dismissed the challenge of the man who had beaten him in Monaco in April.

Mannarino, ranked 62 in the world, had started brightly, swapping breaks with Tsonga, but once the world number 10 found rhythm in his groundstrokes and his opponent needed a time-out in the first set for treatment to his back, it proved a straightforward win. 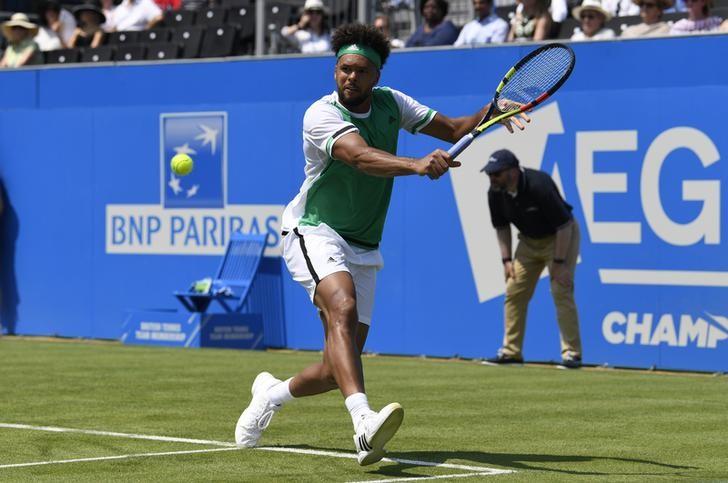 The key game was the marathon eight-deuce sixth in the opening set which finally saw left-hander Mannarino surrender his delivery for a second time after Tsonga had eked out six break points.

A run of seven straight games saw the fifth seed take complete control before he became the first winner in the week-long championships, wrapping up victory in 67 minutes.

“It was a good match. I played pretty well. I had to play my best tennis to get over him,” Tsonga said. “I sweated a lot.”

If he can find his best form, Tsonga, who lost to Andy Murray in the 2011 Queen’s final, could be one of the major threats to world number one Murray, who is seeking a sixth championship triumph.

So will Bulgaria’s sixth seed Grigor Dimitrov, on the evidence of his superb 6-3 6-1 hammering of French Open men’s doubles champion Ryan Harrison in just 54 one-sided minutes.

Dimitrov, who has shown signs of rediscovering his 2014 best when he won Queen’s, was in imperious form, reducing Harrison to such frustration that the American landed a warning for unsportsmanlike conduct after smashing his racket against his foot in the second set.

Murray opens the defense of his title on Tuesday against fellow Briton Aljaz Bedene.