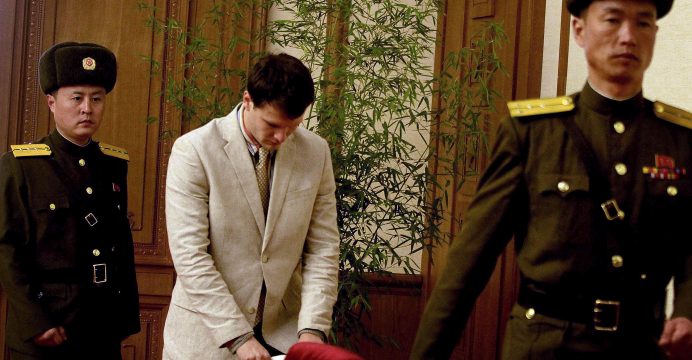 North Korea said on Thursday it had released American citizen Otto Warmbier “on humanitarian grounds” after he had been held prisoner for 17 months.

Warmbier, 22, a University of Virginia student from suburban Cincinnati, was medically evacuated to the United States on Wednesday. His family said he arrived in a state of coma.

The North’s KCNA news agency said in a one-sentence dispatch that Warmbier’s release followed a court decision on Tuesday. It did not provide other details, reports Reuters.

“Under a decision by the DPRK Central Court of June 13, American citizen Otto Warmbier who was serving a sentence of labor was returned on June 13 on humanitarian grounds,” KCNA said. DPRK is short for the North’s formal name, the Democratic People’s Republic of Korea.

Warmbier’s parents, Fred and Cindy, confirmed their son was on a medevac flight.

Warmbier was detained in January 2016 and sentenced to 15 years of hard labor in March last year for trying to steal an item with a propaganda slogan, according to North Korean media.

Warmbier’s family said they were told by North Korean officials, through contacts with American envoys, that Warmbier fell ill from botulism some time after his March 2016 trial and lapsed into a coma after taking a sleeping pill, the Washington Post reported.