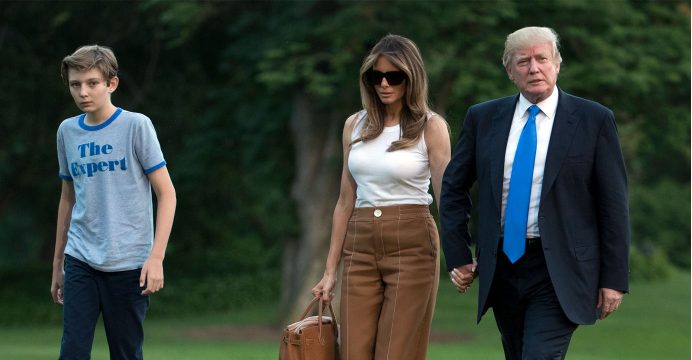 After delay, Trump’s family joins him in White House

As of Sunday night, the White House has two new occupants: US First Lady Melania Trump and her son Barron have finally moved in to 1600 Pennsylvania Avenue.

Six months after President Donald Trump arrived, the Slovenia-born former model and the couple’s 11-year-old son joined him, an aide to the First Lady told AFP.

The pair had previously stayed in New York so that Barron could complete the school year. He is expected to attend St. Andrews Episcopal school, just outside Washington, in the 2017-2018 session.

Before reaching the capital Melania and Barron descended the steps of Air Force One alongside President Trump at Joint Base Andrews, with the youngster decked in a tee-shirt that read ‘The Expert’ playing with a fidget spinner.

Melania’s parents had joined them for the short flight from Bedminster, New Jersey, where Trump had spent the weekend at his golf course.

After arriving at the White House Melania tweeted a picture from a window looking on to the South Lawn and the Washington Monument.

“Looking forward to the memories we’ll make in our new home! #Movingday” she wrote.

Melania is the first Lady in modern history to delay her arrival in Washington after an election win.

During the week at least, Trump had been living alone in the vast, private quarters of the White House as he fends off the flood of reporting over Russia having allegedly meddled in the 2016 US election with the aim of helping him defeat Hillary Clinton.

Arguably, her biggest public outing came last month when she and Trump visited the Middle East and Europe on a trip that the White House later praised as a resounding success.