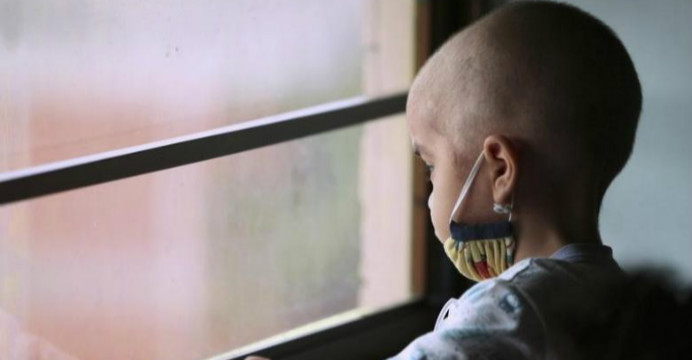 The finding, presented at the American Society of Clinical Oncology meeting in Chicago, is based on analysis of data from 23,600 participants in the Childhood Cancer Survivor Study funded by the National Institutes of Health, reports Reuters.

Overall, severe health conditions arising within 15 years of childhood cancer diagnosis fell to 8.8 percent of survivors in the 1990s, from 12.7 percent in the 1970s, the study found.

A child plays with a balloon inside the cancer ward at The Children’s Hospital in Damascus, Syria

The findings show that childhood cancer survivors who were given more modern treatment approaches, such as reduced exposure to radiation and lower doses of chemotherapy, were faring better, said Todd Gibson of St. Jude Children’s Research Hospital in Memphis, who led the study.

“Not only are more children being cured, but they also have a lower risk of developing serious health problems due to cancer treatments later in life,” he said in a statement.

The researchers focused on severe, disabling, life-threatening or fatal health problems that occurred within 15 years of being diagnosed with pediatric cancer between 1970 and 1999.

The biggest declines in health problems related to treatment occurred in survivors of Wilms’ tumor, a rare kidney cancer. In this group, serious complications fell to 5 percent of survivors in the 1990s, from a high of 13 percent in the 1970s.

There were no reductions in long-term side effects among survivors of neuroblastoma, acute myeloid leukemia, soft-tissue sarcoma, and osteosarcoma.

The biggest improvements were seen with regards to endocrine conditions such as diabetes, thyroid disease or growth hormone deficiency. The researchers saw endocrine problems fall to 1.6 percent for childhood cancer survivors surveyed in the 1990s, compared with 4 percent in the 1970s.

The emergence of secondary cancers fell to 1.6 percent in the 1990s, compared with 2.4 percent in the 1970s. Gastrointestinal and neurological conditions also improved. But there was no improvement in rates of heart or lung conditions, which the researchers said served as a reminder of the need for close follow-up in childhood cancer survivors.