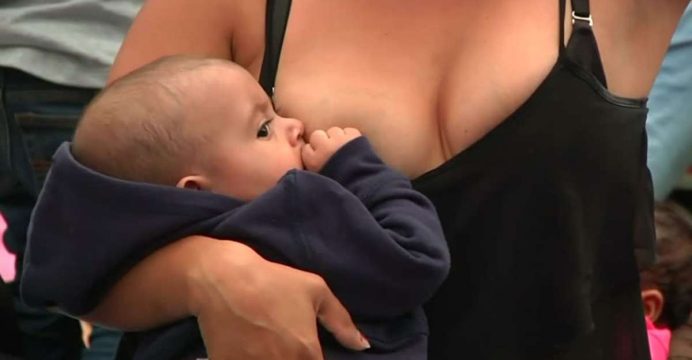 Women who breastfeed their babies for the recommended six months may also be lowering their own risk of developing endometrial cancer, a new study suggests.

In the analysis of data from 17 past studies, researchers found that women who had ever breastfed their children were 11 percent less likely than women who had children but didn’t breastfeed to be diagnosed with endometrial cancer, reports Reuters.

Longer breastfeeding seemed to further lower endometrial cancer risk, though there was little extra benefit past 6-9 months of breastfeeding, the study team reports in Obstetrics and Gynecology.

A mother and baby attend a breastfeeding contest organized by Peru’s Health Ministry in Lima, Peru

“Cancer of the uterus is becoming more common and we need to try to prevent it,” said lead author Susan Jordan of the QIMR Berghofer Medical Research Institute in Brisbane, Australia.

Endometrial cancer is the fourth most common cancer in women in high-income countries such as the United States, Canada, and Australia, according to the International Agency for Research on Cancer.

“The more women know about the things they can do to reduce their risks of future cancer diagnoses, the better,” Jordan said by email. “Although this piece of evidence by itself may not convince women to breastfeed, it contributes to the overall picture of health gains that can come from breastfeeding.”

The World Health Organization recommends that women exclusively breastfeed for the first six months of their baby’s life, then continue breastfeeding even after beginning to introduce solid foods.

The researchers analyzed pooled data from studies participating in the Epidemiology of Endometrial Cancer Consortium, including 10 from the United States and others from Canada, Europe, China and Australia. They looked at more than 26,000 women who had ever had a child, whether they breastfed, and for how long. This included about 9,000 women with endometrial cancer.

Notably, the risk reduction linked to breastfeeding was 28 percent among women born after 1950, but negligible among those born before 1950, which may reflect differences in breastfeeding practices, they study authors note. In the United States in the 1950s and 1960s, for example, breastfeeding rates were much lower than in recent decades, the authors note.

The study doesn’t prove that breastfeeding helps to protect against endometrial cancer, but it’s plausible, the authors write because the growth of this type of cancer is stimulated by estrogen, which is suppressed during breastfeeding.

“The message is not only relevant for women making decisions about breastfeeding but also for society to understand the benefits so we can support women to breastfeed for reasonably long periods of time,” Jordan told reporters.

“However, it’s not always possible for women to breastfeed, so it should also be noted that just because a woman chooses not to or can’t breastfeed, it doesn’t mean she’ll go on to develop cancer.”

“Breastfeeding seems to significantly reduce the risk, but further studies originating in other countries are required to assess the association,” said Lianlian Wang of The Fourth Affiliated Hospital of China Medical University in Shenyang, China, who was not involved with the study.

For instance, the most recent endometrial cancer report produced by the World Cancer Research Fund and American Institute for Cancer Research in 2013 classified the evidence for a benefit from breastfeeding as “limited-no conclusion.”

Jordan and colleagues are working with international collaborators to investigate the effects of breastfeeding on ovarian cancer risk. They’re also researching other factors that may influence the risk of endometrial cancer, including specific medications.