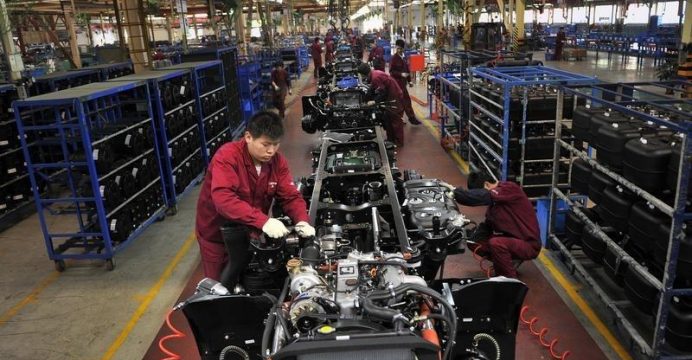 China’s factory activity contracted in May for the first time in almost a year, independent figures showed on Thursday, hinting at deteriorating conditions for goods producers in the world’s second-largest economy. The figures compare with an official reading Wednesday suggesting China factory activity expanded in May.

Recent indicators have pointed to slowing growth in the Asian economic giant as it grapples with weaker global demand, excess industrial capacity and a burgeoning debt problem, reports BSS.

Investors closely watch the private Caixin Purchasing Manager’s Index (PMI) — an indicator of conditions at small manufacturers — as a sign of the country’s economic health each month.

The figure came in at 49.6 for May, down from 50.3 in April and marked the first shrinkage in the sector in 11 months, Caixin said. A PMI figure above 50 marks growth while anything below points to contraction.

“China’s manufacturing sector has come under greater pressure in May and the economy is clearly on a downward trajectory,” Caixin analyst Zhengsheng Zhong said in a joint statement with data compiler IHS Markit.

Manufacturers have stopped actively replenishing fresh supplies as goods in stock have started to pile up, Zhong added.

On Wednesday, official figures focusing on larger factories came in at 51.2, slightly beating the 51 forecast in a Bloomberg News survey and unchanged from the previous month.

China is transitioning from an investment-driven economic model to one more reliant on consumer spending, which has put the brakes on growth in recent years.

But Beijing hopes that its Belt and Road initiative, an ambitious infrastructure project aimed at reviving ancient trading routes from Asia to Europe and Africa, could provide fresh impetus for economic activity.