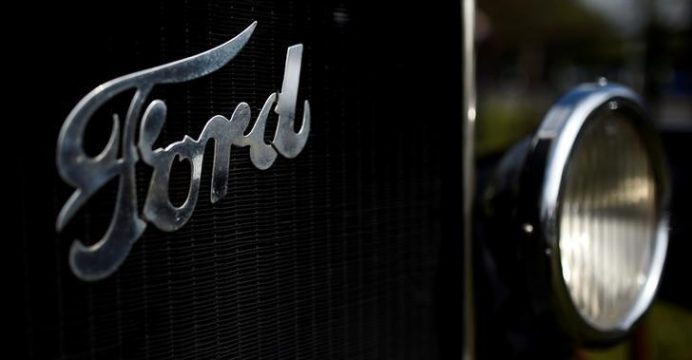 Ford Motor Co plans to shrink its salaried workforce in North America and Asia by about 10 percent as it works to boost profits and its sliding stock price, a source familiar with the plan told reporters on Monday.

A person briefed on the plan said Ford plans to offer generous early retirement incentives to reduce its salaried headcount by Oct. 1 but does not plan cuts to its hourly workforce or its production, reports Reuters.

The move could put the U.S. automaker on a collision course with President Donald Trump, who has made boosting auto employment a top priority. Ford has about 30,000 salaried workers in the United States.

The logo of Ford is seen during the 87th International Motor Show at Palexpo in Geneva, Switzerland March 8, 2017

The cuts are part of a previously announced plan to slash costs by $3 billion, the person said, as U.S. new vehicles auto sales have shown signs of decline after seven years of consecutive growth since the end of the Great Recession.

The Wall Street Journal reported Monday evening that Ford plans to cut 10 percent of its 200,000-person global workforce, but the person briefed on the plan disputed that figure. The source requested anonymity in order to be able to discuss the matter freely.

Ford declined to comment on any job cuts but said it remains focused on its core strategies to “drive profitable growth”.

“Reducing costs and becoming as lean and efficient as possible also remain part of that work,” it said in a statement. “We have not announced any new people efficiency actions, nor do we comment on speculation.”

Ford plans to emphasize the voluntary nature of the staff reductions. Ford said April 27 when it reported first-quarter earnings that it planned to cut $3 billion in costs.

“We are continuing our intense focus on cost and the reason for that is not only mindful of the current environment that we’re in, but also I think preparing us even more for a downturn scenario,” Chief Executive Mark Fields told analysts in a conference call at that time.

During his election campaign, President Trump was highly critical of the auto industry’s use of Mexican plants to produce vehicles for the U.S. market.

Since taking office, Trump has regularly focused on creating jobs in sectors like the automotive industry, though he has released few concrete plans to do so.

Following criticism from Trump, in January Ford scrapped plans to build a $1.6 billion car factory in Mexico and instead added 700 jobs in Michigan.

In March, Ford said it would invest $1.2 billion in three Michigan facilities and create 130 jobs in projects largely in line with a previous agreement with the United Auto Workers union. Trump pounced on that announcement before Ford could release its plans.

“Major investment to be made in three Michigan plants,” Trump posted on Twitter. “Car companies coming back to U.S. JOBS! JOBS! JOBS!”