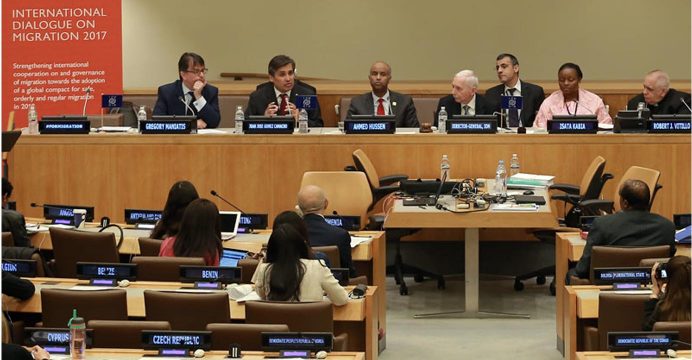 The International Organization for Migration’s (IOM) first International Dialogue on Migration (IDM) at the United Nations (UN) Headquarters in New York, since joining the UN last year, took place on 18 and 19 April.

Under the theme Strengthening International Cooperation on and Governance of Migration towards the Adoption of a Global Compact for Safe, Orderly, and Regular Migration in 2018, the IDM gathered over 300 representatives of States, civil society and other key actors from all relevant sectors.

Participants discussed recommendations to build coherence within and between the various levels of migration governance, promote cooperation mechanisms on migration, and identify concrete elements for a comprehensive global migration framework.

The two-day workshop was also an opportunity for States and all relevant migration actors to frame the core objectives for the global compact, and ground it in the existing normative structures and the 2030 Agenda for Sustainable Development.

“The Global Compact presents an historical opportunity to achieve a world in which migrants move as a matter of genuine choice rather than necessity; a world of opportunity to migrate through safe, orderly and regular channels; and a world in which migration is well governed and is able to act as a positive force for individuals, societies and States,” said IOM Director General William Lacy Swing in his opening remarks.

Ambassador Swing added that “IOM envisions a global compact, therefore, that will place the needs, capacities and contributions of migrants at its core, with a view to ensuring their safety, dignity and human rights”.

Joining Ambassador Swing at the opening session was Louise Arbour, Special Representative of the Secretary-General on International Migration (SRSG), who highlighted that the international community now has “important responsibility to deliver on safe, orderly and regular migration in a manner that is principled and practicable, designed to improve the lives of millions of people on the move, of those they leave behind, and of those who will receive them throughout and at the end of their journey.”

“It is up to all of us to embrace human mobility, and recognize that good migration governance requires a commitment to genuine cooperation. People in transit and destination countries should not be made to look at migrants as burdens, or even worse as threats to themselves or their way of life,” Arbour said in her opening remarks.

The two-day workshop was divided into 6 panels which featured high-level representatives of States and civil society.

“We need to recognize the significant contributions of many of the migrants who move regularly, filling labour force gaps; building the economy and creating jobs through their entrepreneurship; adding young people to countries with low birth rates; and sharing their cultures with those in the countries of adoption,” stressed Ahmed Hussen, Canada’s Minister for Immigration, Refugees and Citizenship.

“The strategy that we foresaw is a comprehensive one: it takes into account the emerging attitude of public opinion, linked to the sense of insecurity of our citizens, and called for a better border management. It also takes into account the necessity of changing the narrative about migration, valuing its positive aspects and valuing the contribution of migrants to a diverse and thriving society,” said Luigi Maria Vignalli, Principal Director for Migration Policies at Italy’s Ministry of Foreign Affairs.

Msgr. Robert J. Vitillo, Secretary General of the International Catholic Migration Commission, advocated for an ‘SDG-like approach’. “Two years could be allocated for the goals and targets most urgent and immediately achievable, including more systematic implementation of best interest determinations for children, reform of migrant worker recruitment practices, alternatives to detention, and orderly departure programmes. Five years for goals more difficult to be achieved, such as return and reintegration; and 15 years for full achievement,” said Msgr. Vitillo.

Amina Mohamed, Deputy Secretary General of the United Nations in her closing remarks noted, “The global compact should therefore be framed in a way that is consistent with, and supportive of the migration elements of the 2030 Agenda. In practice, this is going to mean that one of the objectives of the Global Compact should be to provide us with a practical roadmap on how to achieve target 10.7.”

Participants also widely welcomed IOM’s central role and expertise in the global compact process. In his closing remarks, Peter Thomson, President of the 71st General Assembly, noted that IOM’s support to the intergovernmental process will continue to be vital as the process evolves, particularly in extending to Member States the required technical and policy expertise. He also acknowledged the ongoing close collaboration between IOM, the Office of the PGA, and the office of SRSG.

IOM’s vision for a Global Compact encompasses four core elements: protecting the rights of migrants; facilitating safe, orderly and regular migration; reducing the incidence and impacts of forced and irregular migration; and addressing mobility consequences of natural and human-induced disasters.

The outcomes from the first IDM and the second one scheduled for 18-19 July in Geneva, will feed into the consultation phase of the Global Compact on Migration which will culminate in the stocktaking preparatory meeting in Mexico in December.