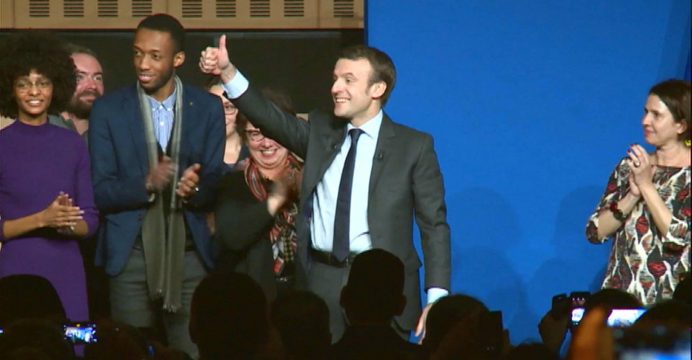 Emmanuel Macron and Marine Le Pen to fight for presidency

Centrist Emmanuel Macron has gone through to the second round of the French election, where he will face far-right leader Marine Le Pen.

Mr Macron, a former banker, is seen as a political newcomer – and ran without the backing of an established party.

After topping Sunday’s vote, he is now favourite to win the run-off on 7 May.

It is the first time in six decades that neither of France’s main left-wing or right-wing parties has had a candidate in the second round.

The nearest challengers, centre-right François Fillon and hard-left Jean-Luc Mélenchon, fell behind with just over 19% each.

But several political rivals are now expected to unite behind Mr Macron in the run-off vote, in a bid to keep Ms Le Pen’s Front National (FN) from power.

At 39, Mr Macron could become the youngest president France has ever had – and the first president in the Fifth Republic who does not belong to a major party.

His campaign promises include:

In a victory speech to supporters, Mr Macron borrowed language favoured by his rival to describe himself as the patriotic choice for France.

“I hope that in a fortnight I will become your president. I want to become the president of all the people of France – the president of the patriots in the face of the threat from the nationalists,” he said.