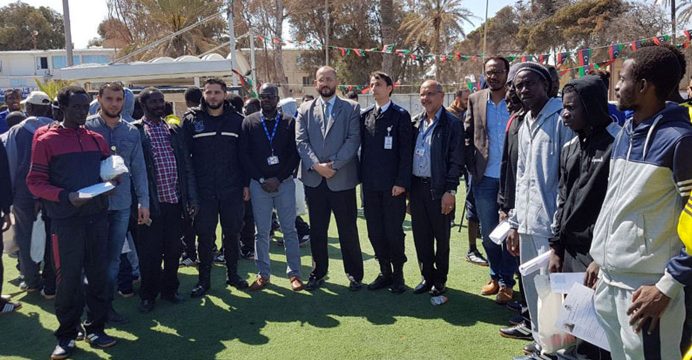 IOM helped 170 stranded Gambian migrants – 158 men and 12 women – return home to Gambia from Libya. There were also 11 children and two infants among the 170 migrants, including six unaccompanied male minors who were also on board the flight.

The charter, which was coordinated with the Libyan and Gambian authorities, as well as IOM Gambia, departed from Tripoli’s Mitiga airport and arrived the same evening.

IOM Libya Chief of Mission Othman Belbeisi and Programme Manager Ashraf Hassan took part in the preparations at the airport before take-off. “It was good to be back in Tripoli and be able to wish the passengers a safe flight before departure,” explained Hassan.

In addition, the passengers aboard the Gambia flight included four medical cases, including one mental health case, all of whom were accompanied by one IOM medical and one operational escort to ensure their safety during the flight.

Twenty-five of the most vulnerable cases on the flight were also eligible for reintegration support in Gambia. The aim of the reintegration assistance is to provide the migrants with an opportunity to start fresh once home by, for example, opening a small business or to continue their education.

So far in 2017, IOM Libya has helped 1,965 stranded migrants return to their countries of origin. Of those, 391 were eligible for reintegration assistance.