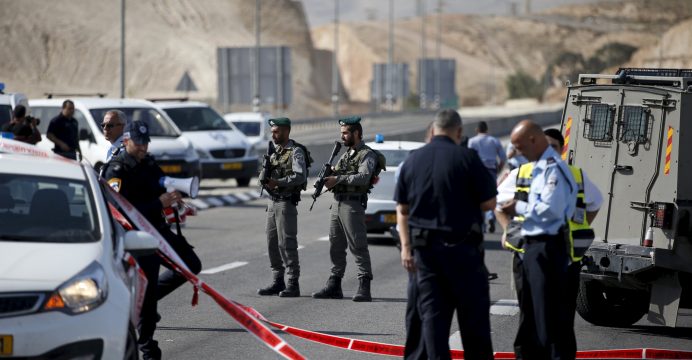 An Israeli has been killed and another wounded in a car-ramming attack in the occupied West Bank, the Israeli military says.

The military said the driver was taken into custody after the incident near the Jewish settlement of Ofra.

It brings to 41 the number of Israelis killed in knife, gun and car-ramming attacks since October 2015.

The military gave no details about the suspect, but photographs showed the car had Palestinian licence plates.

Paramedics provided first aid to the injured man, who has been taken to hospital for further treatment.

Witnesses told Israeli media that the car approached a bus stop at the Ofra junction, on the Route 60 highway north-east of Ramallah, and then accelerated towards the two Israelis waiting there.

In late 2015 and 2016, such attacks by Palestinians or Israeli Arabs happened with near-daily frequency but the rate has dropped in recent months.

At least 242 Palestinians – 162 of them attackers, Israel says – have also been killed in that period, Reuters news agency reports. Others have been killed in clashes with Israeli troops.

Israel has accused Palestinian leaders of inciting the attacks, but they have blamed frustration rooted in decades of Israeli occupation.