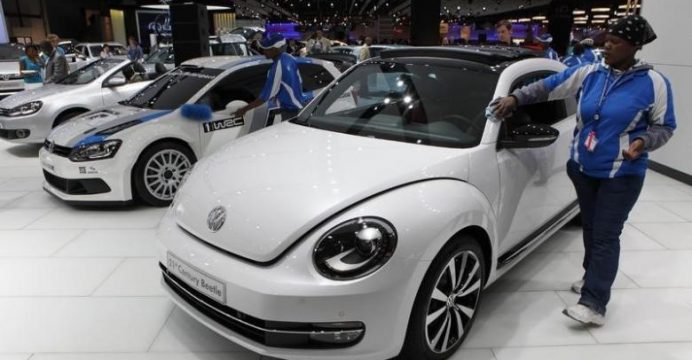 Volkswagen AG said on Thursday it has agreed to pay $157.45 million to settle environmental claims from 10 U.S. states over its excess diesel emissions, as the world’s largest automaker looks to move past the scandal.

The settlement covers states including New York, Connecticut, Massachusetts, Pennsylvania and Washington, as well as some consumer claims. In 2016, the German automaker reached a $603 million agreement with 44 U.S. states, but that settlement did not cover claims in Thursday’s announcement, reports Reuters.

The settlement also requires Volkswagen to offer at least three new electric vehicles in the 10 states by 2020, including two SUVs. VW agreed in December to offer the vehicles in California in the same time frame.

A man walks past the brands of the Volkswagen group during the annual news conference in Wolfsburg, Germany

In total, VW has agreed to spend up to $25 billion in the United States to address claims from owners, environmental regulators, states and dealers and to make buy-back offers.

New York Attorney General Eric Schneiderman said the state’s $32.5 million share of the settlement is the state’s largest- ever air pollution fine and “makes clear that no company – however large or powerful – is above the law.”

The settlement is significantly less than what the states had sought when they sued VW last year. Washington state had said in 2016 it planned to impose $176 million in penalties related to state environmental claims, while other states said they sought penalties totaling hundreds of millions of dollars. States can use settlement funds for any purpose.

Volkswagen said the deal with 10 state attorneys general “avoids further prolonged and costly litigation as Volkswagen continues to work to earn back the trust of its customers, regulators and the public.”

Earlier this month, Volkswagen pleaded guilty in U.S. District Court in Detroit to fraud, obstruction of justice and falsifying statements as part of a $4.3 billion settlement reached with the U.S. Justice Department over the diesel scandal.

Under the plea agreement, VW agreed to sweeping reforms, new audits and oversight by an independent monitor for three years after admitting to installing secret software in 580,000 U.S. vehicles. The software enabled it to beat emissions tests over a six-year period and emit up to 40 times the legally allowable level of pollution.

The September 2015 disclosure that VW intentionally cheated on emissions tests led to the ouster of its chief executive, damaged the company’s reputation and prompted massive bills in what has become the costliest automotive industry scandal in history. VW still faces an ongoing criminal investigation in Germany.