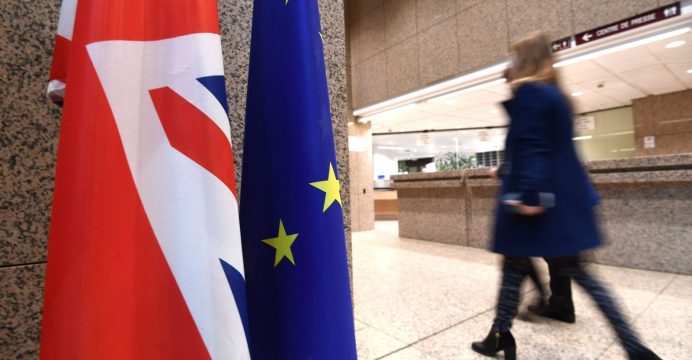 The European Union offered Britain talks this year on a future free trade pact but made clear in negotiating guidelines issued on Friday that London must first agree to EU demands on the terms of Brexit.

The document, seen by Reuters, also sets tough conditions for any transition period, insisting Britain must accept many EU rules after any such partial withdrawal. It also spelled out EU resistance to Britain scrapping swathes of tax, environmental and labor laws if it wants to have an eventual free trade pact.

The guidelines, which may be revised before the EU27 leaders endorse them at a summit on April 29, came two days after Prime Minister Theresa May triggered a two-year countdown to Britain’s withdrawal in a letter to Tusk that included a request for a rapid start to negotiations on a post-Brexit free trade deal.

“Once, and only once we have achieved sufficient progress on the withdrawal, can we discuss the framework for our future relationship,” Tusk told reporters in Malta — a compromise between EU hardliners who want no trade talks until the full Brexit deal is agreed and British calls for an immediate start.

“Starting parallel talks on all issues at the same time, as suggested by some in the UK, will not happen,” Tusk said, while adding that the EU could assess as early as this autumn that Britain had made “sufficient progress” on the exit terms in order to open the second phase of negotiations, on future trade.

Brussels has estimated that Britain might owe it something of the order of 60 billion euros on departure, although it says the actual number cannot be calculated until it actually leaves.

What it does want is to agree the “methodology” of how to work out the “Brexit bill”, taking into account Britain’s share of EU assets and liabilities. Britain disputes the figure but May said on Wednesday that London would meet its “obligations”.

The Union’s opening gambit in what Tusk said would at times be a “confrontational” negotiation with May’s government also rammed home Brussels’ insistence that while it was open to letting Britain retain some rights in the EU during a transition after 2019, it would do so only on its own terms.

Britain would have to go on accepting EU rules, such as free migration, pay budget contributions and submit to oversight by the European Court of Justice — all things that drove last June’s referendum vote to leave and elements which May would like to show she has delivered on before an election in 2020.

“Should a time-limited prolongation of Union acquis be considered, this would require existing Union regulatory, budgetary, supervisory and enforcement instruments and structures to apply,” Tusk’s draft guidelines stated in reference to a transition period that diplomats expect could last two to five years to smooth Brexit.