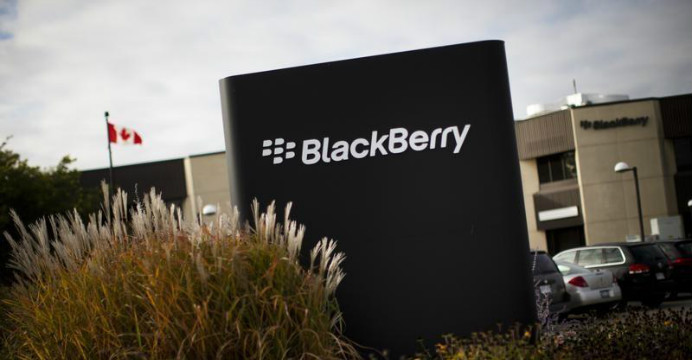 Canada’s BlackBerry Ltd, reported better-than-expected quarterly earnings on Friday, as operating costs nearly halved, and said it expects to be profitable on an adjusted basis in 2018. The company’s U.S.-listed shares were up nearly 5 percent at $7.29 before the bell.

BlackBerry has shifted away from making its once-iconic smartphones to building a software business, which includes mobile device management products and the QNX industrial operating system, reports Reuters.

The company’s adjusted revenue from software and services rose 12.2 percent to $193 million in the fourth quarter ended Feb. 28, from the preceding quarter. BlackBerry said it received more than 3,500 enterprise customer orders in the quarter.

A Blackberry logo hangs behind a Canadian flag at their offices on the day of their annual general meeting for shareholders in Waterloo, Canada

“Looking ahead to fiscal 2018, we expect to grow at or above the overall market in our software business,” Blackberry Chief Executive John Chen said in a statement.

Chen said BlackBerry expected to be profitable on an adjusted basis and generate positive free cash flow for the year ending February 2018.

The Waterloo, Ontario-based company’s net loss narrowed to $47 million or 10 cents per share in the fourth quarter, from $238 million or 45 cents per share, a year earlier. The prior-year quarter included a loss of $127 million related to the sale of certain assets.

Operating expenses fell about 49 percent to $229 million. Revenue fell about 38 percent to $286 million. On an adjusted basis, revenue was $297 million, beating analysts’ average expectation of $289.3 million.