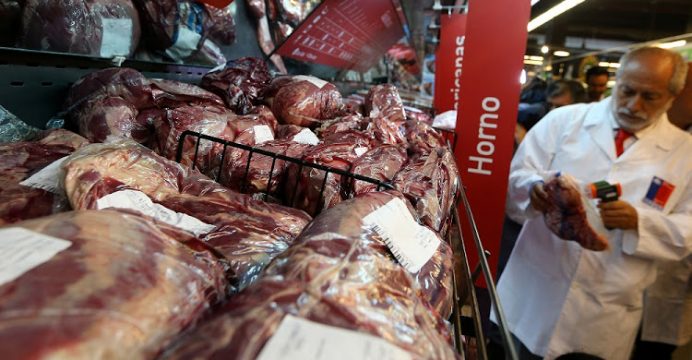 Brazil won a major victory on Saturday in the fight to restore credibility amid a tainted meat scandal, with key markets China, Egypt, and Chile lifting their bans on its products.

The three countries, which had totally closed their markets to Brazilian meat at the beginning of the week, said they would open them to all but imports from the 21 Brazilian processing plants under investigation, reports BSS.

Members of the Public Health Surveillance Agency collect sausages to analyze in their laboratory, at a supermarket in Rio de Janeiro, Brazil

The two-year investigation revealed that some meatpackers had paid crooked inspectors to pass off rotten and adulterated meat as safe.

About 20 countries this week — including the European Union, Japan, and Mexico — closed fully or partially their doors to Brazilian meat imports, whose sales brought in more than $13 billion to the Brazilian economy in 2016.

China quickly suspended the imports on Monday, and Hong Kong followed suit the next day. China is the second-largest importer of Brazilian beef, after Hong Kong, with more than $703 million in imports in 2016. For both meat and poultry, China also was in second place with nearly $859.5 million in imports.

The Brazilian agriculture minister, Blairo Maggi, said that China’s decision “attests to the rigor and quality of the Brazilian sanitary system.”

He later told TV Globo that China will lift its embargo “beginning Monday.”

President Michel Temer, in a statement, welcomed China’s move as an “acknowledgment of reliability” and expressed his “total confidence” that other countries will follow suit.

Egypt, the third-largest importer of Brazilian beef, with $551.2 million in imports last year, also lifted its ban Saturday. So did Chile, which is Brazil’s sixth-largest customer with more than $300 million in annual imports.

Officials have been scrambling to contain the damage, both domestically and with trade partners. Police have arrested more than 30 people and three plants have been closed.

The scandal has rocked one of the strongest sectors in Brazil, whose economy has been grappling with its worst recession for more than two years.

Brazilian meat is exported to more than 150 countries, with principal markets as far apart as Saudi Arabia, China, Singapore, Japan, Russia, the Netherlands, and Italy.

On Wednesday, the government appealed to the World Trade Organization’s 163 other members not to impose “arbitrary” bans on the country’s more than $13 billion meat export industry.

In its letter to the WTO, Brazil pressed its message that a few bad apples are at fault for the scandal and that the Brazilian food industry itself is in good health.

It pointed out that of 11,000 employees at the agriculture ministry, 2,300 work as inspectors on animal products and “only 33 individuals are being investigated for improper conduct.”

The president several times has pointed out that only 184 consignments of meat were deemed by importers to be in violation of standards, among the 853,000 consignments exported in 2016.