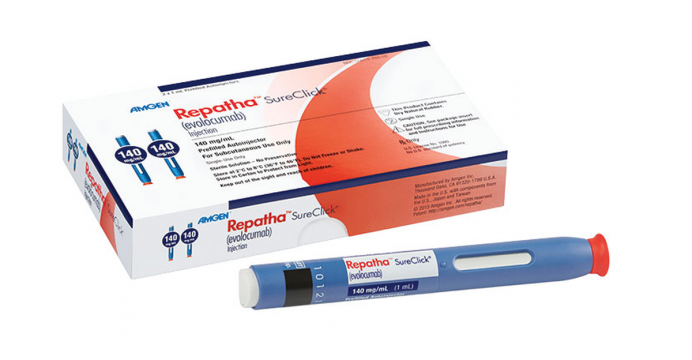 Amgen Inc’s $14,000 cholesterol drug Repatha cut the risk of heart attack and stroke by over 20 percent in patients with heart disease, but results from a highly anticipated study fell short of investor expectations and shares dropped 6 percent.

The data unveiled on Friday demonstrated a clinical benefit beyond the drug’s known ability to slash “bad” LDL cholesterol levels, but came in below high investor expectations. Investors were particularly disappointed that the study did not show the drug reduced deaths, analysts said, reports Reuters.

Sales of Repatha, and its competitor Praluent from Regeneron Pharmaceuticals and Sanofi, have been slow as insurers have been reluctant to pay for the treatment instead of standard statins that cost about $100 per year. The new data could begin to change that.

Two of the biggest pharmacy benefit managers said on Friday that the data shows the drug improves the health of patients and that they expect prescriptions to increase.

Amgen acknowledged during a presentation for investors that it is already selling Repatha at a discount, resulting in net prices between $7,700 to $11,200 per annual treatment, and believes those prices represent good value.

In addition to the fall in shares of Amgen, Regeneron was down 3.4 percent and Sanofi shares closed down 0.5 percent in Paris. Amgen shares had been steadily rising in anticipation of this data. Results from a similar Praluent trial are expected later this year.

It is not certain the highly anticipated 27,564-patient Fourier study will help remove barriers to patient access from health insurers and these pharmacy benefit managers (PBMs), who have been rejecting some 75 percent of prescriptions written for the medicine.

Steve Miller, chief medical officer of Express Scripts Holding, the nation’s largest PBM, said he expects doctors to begin writing more prescriptions for Repatha as soon as Monday, “and we are going to have to respond to that.”

CVS Health’s chief medical officer, Dr. Troyen Brennan, said that after experts review the data, it will likely expand the patient group eligible by about fourfold, to roughly 4 million people.

Repatha cut the combined risk of heart attacks, strokes and heart-related death by 20 percent compared with a placebo in patients already on high doses of cholesterol-lowering statins, such as Pfizer’s Lipitor. Most had had a prior heart attack or stroke.

“For this high-risk patient group it seems likely that such medicines will become standard of care,” said Leerink Partners analyst Geoffrey Porges. “However, for lower risk patients this study still leaves payers with significant ammunition to restrict access.”

In the second year of the study, the benefits were more pronounced, with a combined heart attack and stroke risk reduction of 33 percent.

“Just like in statin trials the benefit appeared to grow over time,” said Dr. Marc Sabatine, the study’s lead researcher, who presented the data at the American College of Cardiology scientific meeting in Washington.

“As a clinician this is very big news. We have another tool to significantly reduce heart attacks and stokes,” said Sabatine, from Brigham and Women’s Hospital in Boston.

Dr. Steven Nissen, chief of cardiology at Cleveland Clinic, who was not involved in this study but has led other Repatha trials, said expectations for more dramatic results were unrealistic.

“The magnitude of benefit on heart attacks and strokes are about what thoughtful people would have expected,” he said, adding that he did not expect a death benefit after just 26 months.

The trial’s primary composite goal added need for artery-clearing procedures and hospitalization due to chest pains from angina. On that measure, the overall risk reduction of 15 percent was below analyst expectations, primarily due to little difference in angina hospitalization.

Repatha, injected either once or twice a month, lowered LDL by about 60 percent to a median of 30, with a quarter of patients getting below 20. Earlier guidelines set an LDL target of 70 for such high-risk patients.

There were no reports concerning safety issues. Amgen said it is taking steps to remove barriers to patient access, including a plan under which it would offer to refund Repatha costs for eligible patients who have a heart attack or stroke.

Sabatine said he would like to see Repatha tested in other high-risk patients, such as those with type 2 diabetes, which could substantially increase the market.