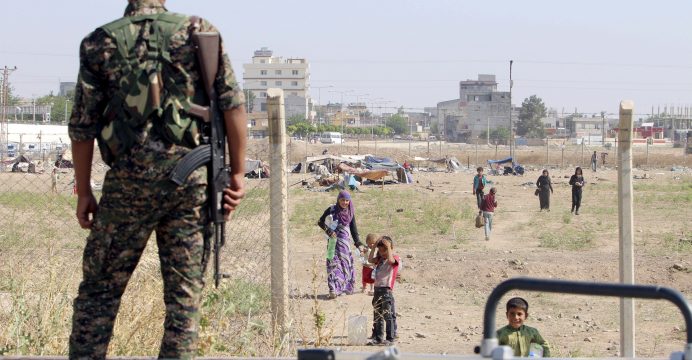 The head of the Syrian Kurdish YPG militia said a U.S.-backed assault to drive Islamic State from its de-facto capital Raqqa would begin at the start of April and the YPG would be taking part, despite fierce opposition from neighboring Turkey.

A spokesman for the U.S. Pentagon, Navy Captain Jeff Davis, said no decision had been made yet on the Raqqa offensive, which is part of a two pronged attempt to dismantle the caliphate declared by Islamic State in parts of Syria and Iraq in 2014, reports Reuters. U.S.-backed forces, including the YPG, are closing in on the city and President Donald Trump has said he wants to accelerate efforts to crush the hardline militants, who are under siege by U.S.-backed Iraqi forces in the much larger city of Mosul.

The comments by YPG commander Sipan Hemo to Reuters were the first indication of a date of an attack.

In a written reply to questions, Hemo, who rarely if ever appears in the media, said: “Regarding the decision to liberate Raqqa and storm it, the matter is decided and at the start of the month of April the military operation will begin.”

He added: “We believe that liberating Raqqa will not take more than a number weeks.” His comments were relayed via a YPG spokesman.

Ankara has been pressing the United States to drop its military alliance with the Syrian Kurdish group, which it views as part of the Kurdistan Workers’ Party (PKK) that has been fighting an insurgency for three decades in Turkey.

The role of the YPG is a major point of contention between the United States and its NATO ally Turkey, which wants Washington to draw instead on Syrian Arab rebel groups backed by Ankara for the final assault on Raqqa, a predominantly Arab city.

Hemo said YPG militia would storm Raqqa alongside Arab fighters in the Syrian Democratic Forces (SDF). “Of the total force for storming Raqqa, 25 percent are YPG, who are set apart in their combat experience and high-level command skills directing battles in cities,” he said.

Turkish Foreign Minister Mevlut Cavusoglu told broadcaster Haberturk in an interview late on Thursday that parts of the U.S. military favored incorporating the YPG into the assault force because of its earlier successes on the ground.

“But we also see that there are different stances within the U.S. administration. Right now, they do not have a clear stance on this. They are going through a transition period,” he said, adding: “The talks are ongoing.”

The Pentagon has said that Arab fighters account for about 75 percent of the alliance of militias fighting to isolate Raqqa.